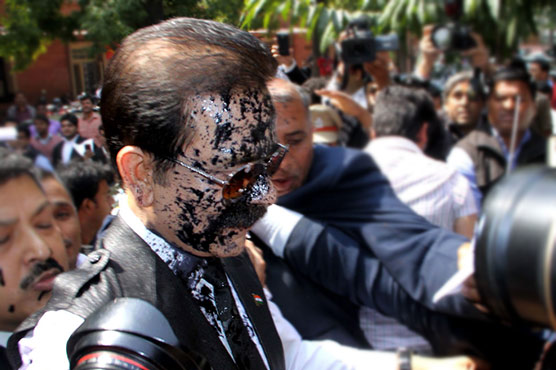 Roy's lawyers asked the court to withdraw the arrest warrant but the request was turned down.

NEW DELHI (AFP) - A protester splattered the boss of India s giant Sahara group with ink on Tuesday as he arrived at the Supreme Court for a hearing over delays in repaying billions of dollars to small investors.

The shirtless protester attacked flamboyant billionaire Subrata Roy, whose face was blackened with the ink, as he reached the top court in New Delhi following his arrest last week.

As guards whisked away Roy, the protester yelled "thief" before a group of lawyers and Sahara supporters starting beating him up, as police dragged him away from the court, an AFP photographer said.

Roy "wilfully submitted himself" to police on Friday, two days after the court ordered his arrest over delays in repaying billions of dollars collected from rural savers through illegal bond sales.

The court issued the order after Roy s lawyers said he could not appear in person at a hearing last week because his elderly mother was ill, frustrating the judges and further delaying the 18-month-old case.

Sahara, a famous name in India through its former sponsorship of the national cricket team, raised about 200 billion rupees ($3.2 billion) from millions of savers in a process judged by authorities in 2012 to be against the law.

Sahara, whose boss Roy is often photographed with Bollywood stars, maintains that the company was only helping small investors outside the banking system and that it has never defaulted on them.

The Sahara empire extends from a stake in a Formula 1 racing team to a sprawling Indian luxury township, the iconic New York Plaza Hotel and Grosvenor Hotel in London.

Roy s lawyers last week asked the court to withdraw the arrest warrant but the request was turned down and the case was listed for hearing on Tuesday.

Sahara s woes began in 2008 when it shut operations as India s biggest non-bank deposit-taking firm on orders of the court, which was worried about whether the investments in which money was being parked were sound.

Observers say much of Sahara s fundraising success rested on the fact vast numbers of rural Indians have no access to banks and no other place to put their money, other than in poorly regulated non-bank institutions.