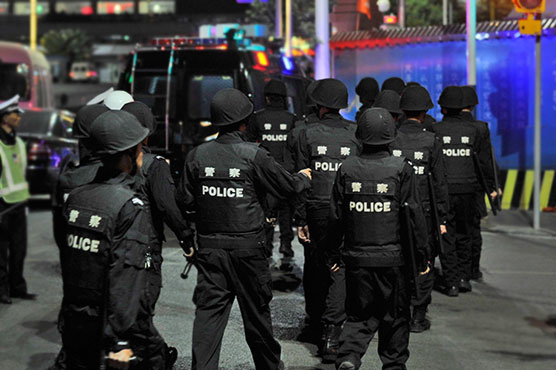 "Three suspects involved in the terrorist attack in the southwestern city of Kunming had been captured," the official news agency Xinhua said, citing the ministry of public security.

Altogether eight members of a "terrorist gang" carried out the stabbing spree late Saturday, it said.

Four were shot dead by police at the time and a wounded woman was captured at the scene, it continued, naming their leader as Abdurehim Kurban.

China has blamed separatists from its restive far-western region of Xinjiang -- home to the mainly Muslim Uighur minority -- for what it describes as an act of terror, with state media dubbing the incident "China s 9/11".

Defiant Kunming residents queued to donate blood on Monday while others vented their anger.

And Chinese Internet users accused the United States of double standards, after Washington condemned the bloody rampage by knife-wielding attackers but refrained from calling it a terrorist incident.

Foreign ministry spokesman Qin Gang told reporters that "some East Turkestan flags were found on the scene", referring to a group Beijing regards as a separatist terrorist movement.

Hong Kong broadcaster Phoenix TV showed images of a dark blue flag embroidered with the Islamic declaration of faith, said to have been found by police.

In Kunming a taxi driver said she would stay away from the train station where the violence occurred, underscoring the tense sense of fear in the southwestern city.

She then launched into an anti-Uighur tirade. "I won t let them into my taxi. They are all drug addicts and everyone outside Xinjiang distrusts them," she said, refusing to give her name.

"They are trouble. Most people thought like this before, so you can imagine what people think now," she added, pounding her steering wheel for emphasis.

Xinjiang is periodically hit by violent clashes between members of the Uighur minority and security forces, which China blames on terrorist groups seeking independence for the region.

But attacks targeting civilians are rarer and almost unheard of in Yunnan province, which is more than 1,600 kilometers (1,000 miles) from Xinjiang and a popular tourist destination.

The attack, which prompted shock and outrage nationwide, led to tightened security at transport terminals across the country.

It came just days before the annual meeting of China s parliament. An associated debating chamber session opened Monday with a period of silence for the victims.

Police maintained a prominent presence on the streets of Kunming, two days after attackers slashed indiscriminately at people queueing to buy tickets at the busy railway terminal.

Armed guards remained on duty at the station, although the temporary waiting area that was sealed off Sunday had reopened.

Outside the large open shelter where witnesses said the carnage began, people laid flowers and wreaths around a few dozen burnt-out candles left over from a vigil the previous night. Plainclothes security patrolled the area.

Three kilometers (two miles) away in Kunming s eastern suburbs, around 50 people queued to give blood at a temporary donation centre.

"I came here to donate blood... because these terrorists are too cruel as they inflicted too much pain on the common people," said Hu Jiaquan, 35, as he waited to give his first ever donation.

"All citizens should use (our) own strength to defeat these extremists," he added.

Another donor, Yin Jiang, told AFP: "They are so cruel that they took action against elderly, women and children."

The US embassy in China said on social media that it condemned the "terrible and senseless act of violence in Kunming" and expressed condolences to those affected by what it called a "tragedy".

But thousands of Chinese Internet users slammed the US for refusing to follow China in defining the attack as terrorism, comparing the knifings to last year s bombing of the Boston Marathon as well as to 9/11.

"Would Americans say the same thing about similar attacks on their own territory?" Ma Xiaolin, a website administrator, asked in a typical comment on Sina Weibo, a Chinese equivalent of Twitter.

Analysts say any crackdown by authorities, coupled with public anger at Uighurs, could lead to increased repression of the minority, potentially locking China into a vicious cycle of increasing violence.

Dilshat Raxit, a spokesman for the World Uyghur Congress, an exile group that Beijing says supports terrorism, expressed fears Monday that the attack would be used as "a new political excuse to suppress Uighurs".