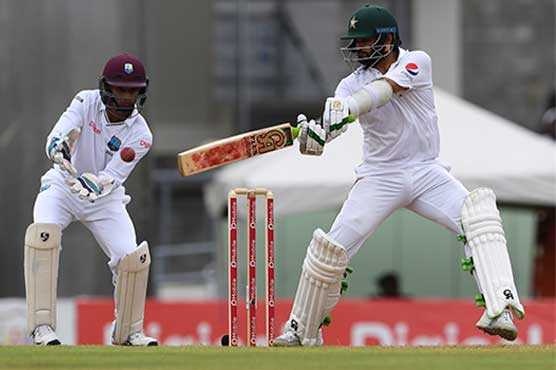 Azhar Ali was unbeaten on 85 at stumps.

ROSEAU (AFP) – An unbeaten 85 by Azhar Ali and 55 from Babar Azam put Pakistan in a solid position at 169 for two at stumps on a rain-shortened first day of the third and final Test against the West Indies at Windsor Park in Dominica on Wednesday.

Fresh from a workman-like first innings century despite defeat in the second Test, Ali was again a model of composure in progressing towards another significant innings after over five hours at the crease during which he faced 219 deliveries, stroking two sixes and seven fours.

His confidence dented after enduring the indignity of a "pair" in that loss in Barbados, Azam was less assured at the start of his innings and needed a generous slice of luck to get to his second half-century of the series.

Leg-spinner Devendra Bishoo should have claimed his wicket but the right-hander, on 28, was badly missed by wicketkeeper Shane Dowrich just as play resumed in the early afternoon following the first of two stoppages for a steady, persistent drizzle.

That lapse added to the increasing list of costly errors in the field for the West Indies during this 2017 international season in the Caribbean as the pair extended their second-wicket partnership to 120 when Azam eventually departed in a long final session, offering a simple catch to Kieran Powell at first slip off Alzarri Joseph.

Younis Khan, who together with captain Misbah ul Haq is playing his farewell Test, will resume in partnership with Ali on the second morning, weather permitting.

Further compounding the home side’s woes after Jason Holder won the toss and chose to bowl first in heavily overcast conditions was the lack of potency of his prime opening bowler, Shannon Gabriel. Although economical, Gabriel could not recapture the hostility that wrecked Pakistan’s second innings on the final day of the second Test in Barbados.

Sharing the new ball with Gabriel, Joseph was completely out of sorts in his first spell, prompting the introduction of Roston Chase’s off-spin within the first hour’s play.

That resulted in the visitors’ only casualty of the morning. Shan Masood, playing his first match of the series in place of the unwell Ahmed Shehzad, reached nine off 30 deliveries and prodded indecisively at a delivery from Chase for Holder to take the straightforward catch at second slip.

Apart from the recall of Masood, Hasan Ali is making his debut at the expense of leg-spinner Shadab Khan, who struggled in his first appearance in the second Test.

Pakistan have never won a Test series in the Caribbean on seven previous tours while the West Indies are seeking a first Test series triumph in five years against a team ranked higher than themselves.

The Smuggling Game: Playing with life and death to reach Europe