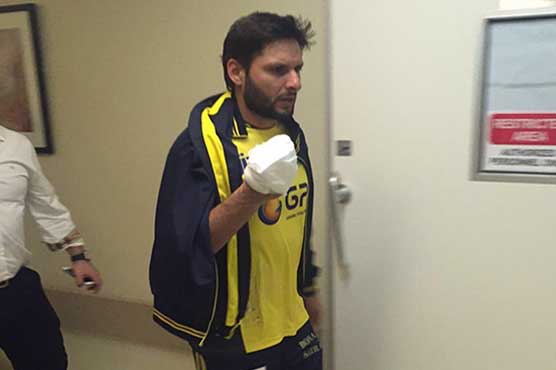 Afridi confirmed that he would not play, in a video which he posted on his Facebook page. He said that he has been advised by doctors to take a rest for at least 10 days.

Afridi received 12 stitches on his hand, after he got injured while attempting to take Kieron Pollard’s catch in the match against Karachi Kings.

Afridi said sorry to his fans and told that he wanted to perform well in the final after not showing satisfactory performance in World T20.

Shahid Afridi message for all his fans will miss you Boom Boom in final #GetWellSoon pic.twitter.com/tSPAQrZDCy

Earlier on Friday night, Kamran Akmal fired Peshawar Zalmi into the Pakistan Super League final but left his foreign teammates facing a dilemma over whether or not to travel to Lahore for Sunday’s title match.

England trio Chris Jordan, Samit Patel and Dawid Malan as well as West Indies stars Darren Sammy and Marlon Samuels are all part of the Peshawar squad. However, their opponents on Sunday, the Quetta Gladiators have already seen their five-strong foreign legion opt out of the trip to Lahore after two bomb blasts last week killed 22 people and left over 100 injured in the city.