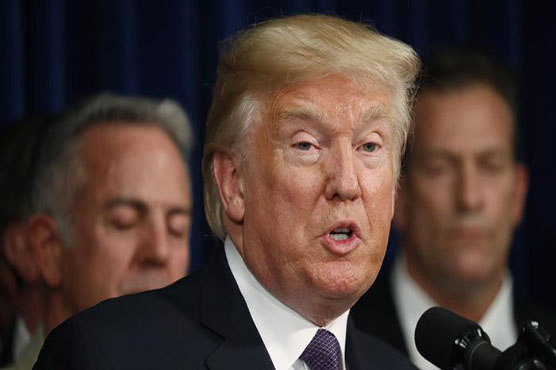 WASHINGTON (Reuters): The US budget deficit is proving to be a major obstacle to the tax reform plan being offered by President Donald Trump and top congressional Republicans, with one leading Senate hawk saying a week after the plan was introduced that any enlarging of the fiscal gap could kill his support.

The main problem is that the federal government is swimming in red ink with an annual deficit of $550 billion and a national debt -- the accumulation of past deficits and interest due to lenders to the U.S. Treasury -- exceeding $20 trillion.

The Republican tax plan unveiled last week calls for as much as $6 trillion in tax cuts that would sharply reduce federal revenues. No commensurate spending cuts have been proposed. So, on their own, the tax cuts being sought by Trump would hugely expand the deficit and add to the debt.

The administration has said two things must happen for the revenue losses to be offset. One is for economic growth to generate new tax revenues. Forecasts for that vary, with Republicans projecting much stronger economic growth and unusually large revenue gains resulting from tax cuts.
“While policymakers are gearing up to address tax reform this fall, some have advocated for abandoning true reform and instead focusing solely on tax cuts. To combat arguments that such cuts will balloon the national debt, tax cut advocates have argued that the cuts could pay for themselves, largely through faster economic growth,” said the Committee for a Responsible Federal Budget, a Washington balanced-budget advocacy group.

“However, this claim is false,” the group said in a statement.

The other way to prevent expanding the deficit is for the U.S. Congress to find new revenues for the government by closing certain tax breaks to offset Trump’s proposed deep tax cuts for corporations, small businesses and wealthy Americans.
At least $4 trillion in new revenue needs to be raised this way, said lawmakers, but every tax break on the federal books has a special interest protecting it and that is a challenge.

For example, Republicans proposed ending or limiting the individual tax deduction for state and local income taxes paid. Closing the tax break would bring in $1.3 trillion in revenues.

But high-tax states would be hit harder than low-tax states by such a move. Lawmakers in New York and California, which have among the highest state tax levels in the country, were resisting the proposal to repeal the deduction, eroding support for the plan, even among Republicans, said lawmakers and aides.
Corker has vowed that he will not support a tax plan that adds to the federal deficit. As a result, he is firm about what needs to be done to win his support for tax cuts.

“There’s no way to do permanent tax reform, no way, without … loophole closing,” said the Tennessee Republican, who announced recently that he will not run for reelection in November 2018.

Analysts said the $20 trillion national debt is already on an unsustainable upward path as the government pays for the medical and retirement costs of the aging Baby Boom generation.

That would worsen if rising government debt undermined future economic growth by pushing interest rates higher and choking off private sector access to credit, they said.

An administration official said the White House is inclined to let Congress lead on the state and local tax deduction.
House and Senate Republicans need to agree on a budget resolution if they intend to pass a tax bill before January and without broad bipartisan support from Democrats. The House was set to vote on its version of a budget resolution on Thursday.