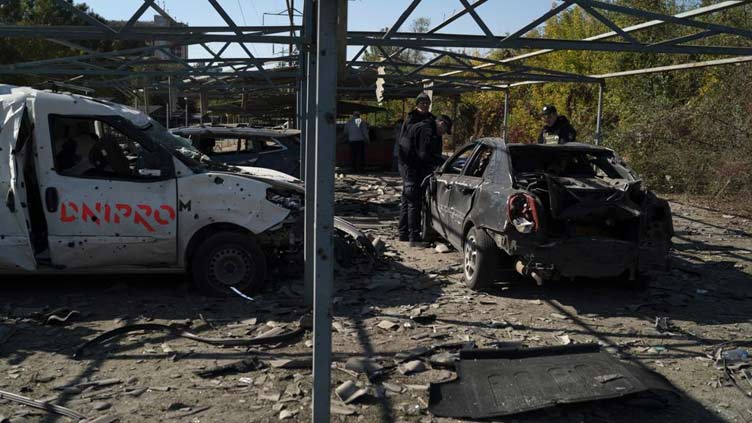 Dmytro Pocishchuk, a hospital medic in the Zaporizhzhia region’s capital who has treated dozens of people wounded during Russian attacks in recent weeks, said people sought safety outdoors or in his building’s basement when the familiar blasts started at 5:15 a.m. Saturday.

“If Ukraine stops, these bombings and killings will continue. We can’t give up to the Russian Federation,’” Pocishchuk said several hours later. He put a small Ukrainian flag on the broken windshield of his heavily damaged car.

Russia has lost ground in the nearly seven weeks since Ukraine’s armed forces opened their southern counteroffensive. This week, the Kremlin launched what is believed to be its largest coordinated air and missile raids since Russia’s invasion of Ukraine on Feb. 24.

Kyiv region Gov. Oleksiy Kuleba said the missile that hit a power site Saturday morning didn’t kill or wound anyone. Citing security, Ukrainian officials didn’t identify the site, one of many infrastructure targets the Russian military tried to destroy after an Oct. 8 truck bomb explosion damaged the bridge that links Russia to the annexed Crimean Peninsula.

“Putin may hope that by increasing the misery of the Ukrainian people, President (Volodymyr) Zelenskyy may be more inclined to negotiate a settlement that allows Russia to retain some stolen territory in the east or Crimea,” said Ian Williams, a fellow at the Center for Strategic and International Studies, a policy organization based in Washington. “A quick look at history shows that the strategic bombing of civilians is an ineffective way to achieve a political aim. ”

This week’s wide-ranging retaliatory attacks, which included the use of self-destructing explosive drones from Iran, killed dozens of people. The strikes hit residential buildings as well as infrastructure such as power stations in Kyiv, Lviv in western Ukraine, and other cities that had seen comparatively few strikes in recent months.

Putin said Friday that Moscow didn’t see a need for additional massive strikes but his military would continue selective ones. He said that of 29 targets the Russian military planned to knock out in this week’s attacks, seven weren’t damaged and would be taken out gradually.

The Institute for the Study of War, a think tank based in Washington, interpreted Putin’s remarks as intended to counter criticism from pro-war Russian bloggers who “largely praised the resumption of strikes against Ukrainian cities, but warned that a short campaign would be ineffective.”

The neighboring Kherson region, one of the first areas of Ukraine to fall to Russia after the invasion and which Putin also illegally designated as Russian territory last month, remained the focus of a Ukrainian counteroffensive.

Kyiv’s army has reported recapturing 75 villages and towns there in the last month, but said the momentum had slowed, with the fighting settling into the sort of grueling back-and-forth that characterized Russia’s months-long offensive to conquer Ukraine’s eastern Donbas region.

On Saturday, Ukrainian troops attempted to advance south along the banks of the Dnieper River toward the regional capital, also named Kherson, but didn’t gain any ground, according to Kirill Stremousov, a deputy head of the occupied region’s Moscow-installed administration.

“The defense lines worked, and the situation has remained under the full control of the Russian army,” he wrote on his messaging app channel.

The Kremlin-backed local leaders asked civilians Thursday to leave the region to ensure their safety and to give Russian troops more maneuverability. Stremousov reminded them they could evacuate to Crimea and cities in southwestern Russia, where Moscow offered free accommodations to residents who agreed to leave.