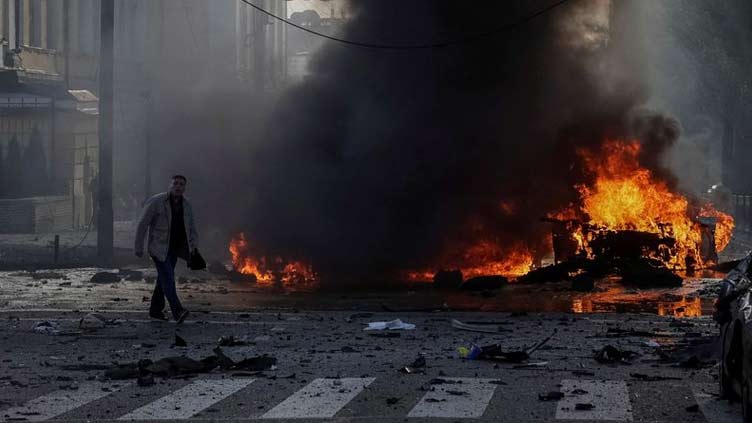 KYIV (Reuters) - U.S.-led NATO said on Tuesday its member states were boosting security around key installations after Russia escalated its attacks on Ukraine and stepped up threats against the West.

Russian missiles hit Ukraine for a second day, although with less intensity than on Monday, when dozens of air raids killed 19 people, wounded more than 100 and knocked out power supplies across the country.

Belarus, Moscow s closest ally, said it had begun an exercise to assess its "combat readiness" after ordering troops on Monday to deploy with Russian forces near its border with Ukraine. Belarus allowed Russia to use its territory to invade Ukraine but has not yet sent its own troops across the border.

Moscow has annexed new tracts of Ukraine, mobilised hundreds of thousands of Russians to fight and repeatedly threatened to use nuclear arms in recent weeks, spreading alarm in the West. A European diplomat said NATO was considering convening a virtual summit of the Western defence alliance to consider its response.

NATO was closely monitoring Russia s nuclear forces, but had not seen any change in its nuclear posture, Secretary General Jens Stoltenberg told reporters in Brussels.

The allies were increasing security around critical infrastructure after attacks on gas pipelines running under the Baltic Sea and any deliberate attack would be met with a "united and determined response", he said. It is still unclear who was behind the recent explosions.

More missile strikes killed at least one person in the southeastern Ukrainian town of Zaporizhzhia and left part of the western city of Lviv without power, local officials said. Air raid sirens earlier wailed across Ukraine for a second day.

Russian President Vladimir Putin, under domestic pressure to ramp up the seven-month war as his forces have lost ground since early September, said he had ordered Monday s strikes as revenge for a blast that damaged Russia s bridge to annexed Crimea.

U.S. President Joe Biden and other G7 leaders met virtually on Tuesday to discuss what more they could do to support Ukraine and they heard President Volodymyr Zelenskiy plead for air defence systems, which he has called his "number 1 priority".

Zelenskiy said Russia had started a new stage of escalation, so new sanctions were needed, and he called for an international monitoring mission on Ukraine s border with Belarus.

Belarusian President Alexander Lukashenko has repeatedly accused Ukraine of preparing to attack his country, though he has offered no evidence and Kyiv denies any such plan.

The Belarusian defence ministry said on Tuesday it was starting what it called a military inspection: "During the inspection, military units and sub-units will work on how to assume combat readiness."

Residents in the capital Kyiv took cover for a second day deep in the underground metro, where trains were still running.

Viktoriya Moshkivski, 35, and her family were among hundreds of people in the Zoloti Vorota station, near a park where a missile ripped a crater next to a playground on Monday.

"(Putin) thinks that if he scares the population, he can ask for concessions, but he is not scaring us. He is pissing us off," she said as her sons, Timur, 5, and Rinat, 3, sat by her side on a sleeping bag, the younger playing with a King Kong action figure.

"They ve hit many yesterday and they hit the same and new ones today," he wrote on Twitter. Hundreds of settlements around Kyiv, Lviv and elsewhere were still without power on Tuesday, Deputy Interior Minister Yevheniy Yenin said.

In an overnight video address from the scene of one of the attacks in Kyiv, Zelenskiy promised Ukraine would keep fighting.

"We will do everything to strengthen our armed forces. We will make the battlefield more painful for the enemy."

Moscow has accused the West of escalating the conflict by supporting Ukraine.

"We warn and hope that they realise the danger of uncontrolled escalation in Washington and other Western capitals," Russian Deputy Foreign Minister Sergei Ryabkov was quoted as saying by RIA news agency on Tuesday.

Russian Foreign Minister Sergei Lavrov said Russia would not turn down a meeting between Putin and Biden at a forthcoming G20 meeting and would consider the proposal if it receives one.

Putin on Tuesday met the president of the United Arab Emirates, a member of the group of oil producers known as OPEC+ that rebuffed the United States last week by announcing steep production cuts.