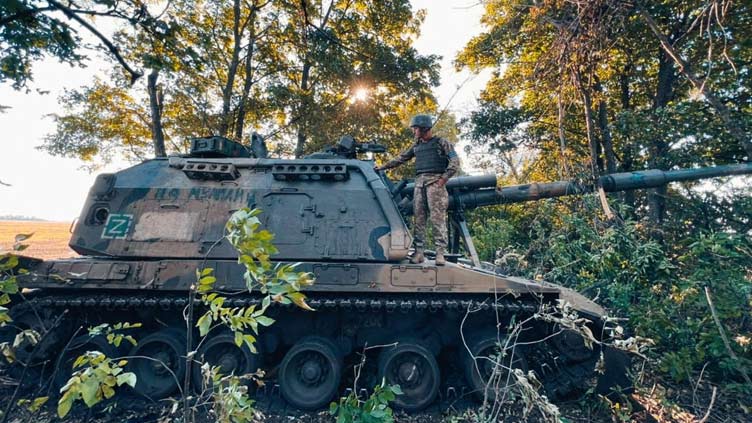 ON ROAD TO BALAKLIIA (Reuters) - Ukraine said on Tuesday it aimed to liberate all of its territory after driving back Russian forces in the northeast of country in a rapid offensive, but called on the West to speed up deliveries of weapons systems to back the advance.

Since Moscow abandoned its main bastion in northeastern Ukraine on Saturday, marking its worst defeat since the early days of the war, Ukrainian troops have recaptured dozens of towns in a stunning shift in battleground momentum.

"The aim is to liberate the Kharkiv region and beyond - all the territories occupied by the Russian Federation," she said on the road to Balakliia, a crucial military supply hub recaptured by Ukrainian forces late last week which lies 74 km (46 miles) southeast of Kharkiv, Ukraine s second largest city.

Since Russia s Feb. 24 invasion, Washington and its allies have provided Ukraine with billions of dollars in weapons that Kyiv says have helped limit Moscow s gains. Russian forces control around a fifth of the country in the south and east but Ukraine is now on the offensive in both areas.

The Ukrainian military did not report any fresh advances on Tuesday, saying Russian forces were shelling parts of Kharkiv region retaken by Ukraine and attacking further south in Donetsk region, which Moscow is trying to seize for separatist proxies.

Ukraine had repelled the Donetsk region attacks, its general staff report said, while Denis Pushilin, head of the separatist Donetsk People s Republic, said its forces were repelling Ukrainian attacks and he believed the situation would improve.

Serhiy Gaidai, Ukrainian governor of the neighbouring Luhansk region, which Moscow has seized, said a major Ukrainian offensive may be expected there on Tuesday.

Reuters could not immediately verify the battlefield reports.

A senior U.S. military official said earlier that Russia had largely ceded territory near Kharkiv in the northeast and pulled many of its troops back over the border.

A video issued by Ukraine s border guards service showed what it said were Ukrainian troops liberating the town of Vovchansk near the country s border with Russia, burning down flags and tearing down a poster saying "We are one with Russia".

A Moscow-based diplomat said the advance in Kharkiv region was encouraging but expressed caution over the next steps.

"We shouldn t get ahead of ourselves," the diplomat said on condition of anonymity, adding that a key question was whether Ukrainian forces would be able to move into Luhansk region.

"So a significant moment but not yet the beginning of the end," the diplomat said, pointing to the importance of a possible impact on Russian morale in the south around Kherson, where Ukraine s advance had so far been slow.

U.S. Secretary of State Antony Blinken said on Monday that Ukrainian forces had made "significant progress" with Western support to ensure it has the equipment it needs.

Zelenskiy said Ukraine had recaptured roughly 6,000 square km (2,400 square miles) of territory, double what officials had cited on Sunday. A sliver of Ukraine s land mass of around 600,000 square km, it is approximately equivalent to the combined area of the West Bank and Gaza.

After being pushed back from the capital Kyiv soon after its invasion, Russia refocused on capturing territory adjacent to Crimea in the south which it annexed in 2014 and in Donetsk and Luhansk in the industrial Donbas in eastern Ukraine, which separatists claimed the same year.

"Second, Luhansk/Donetsk liberation will cause domino effect, collapse ru-frontline and lead to political destabilization. It is possible. Weapons required," he wrote on Twitter.

Russia denies targeting civilians, saying that what it calls its "special military operation" in Ukraine is designed to degrade its neighbour s military.

HANGING BY A THREAD

Kremlin spokesman Dmitry Peskov said there was no discussion of a nationwide mobilisation to bolster the operation in Ukraine.

Criticism of Russia s leadership from online nationalist commentators who have demanded mobilisation was an example of "pluralism", Peskov told reporters, adding that Russians as a whole continue to support President Vladimir Putin.

The Kremlin on Monday said the military operation would continue until acheiving its goals but sidestepped a question about whether Putin still had confidence in his military leadership.

Ukrainian officials say Russia has responded to Kyiv s battlefield successes by shelling power stations and other key infrastructure, causing blackouts in Kharkiv and elsewhere. Russia has blamed Ukraine for the blackouts.

Shelling around the Russian-held Zaporizhzhia nuclear power plant has sparked grave concerns about the risk of radioactive catastrophe. The U.N. atomic watchdog has proposed the creation of a protection zone around the nuclear plant, Europe s largest, and both sides are interested, IAEA chief said.

"We are playing with fire," Rafael Grossi told reporters. "We can not continue in a situation where we are one step away from a nuclear accident. The safety of the Zaporizhzhia power plant is hanging by a thread."