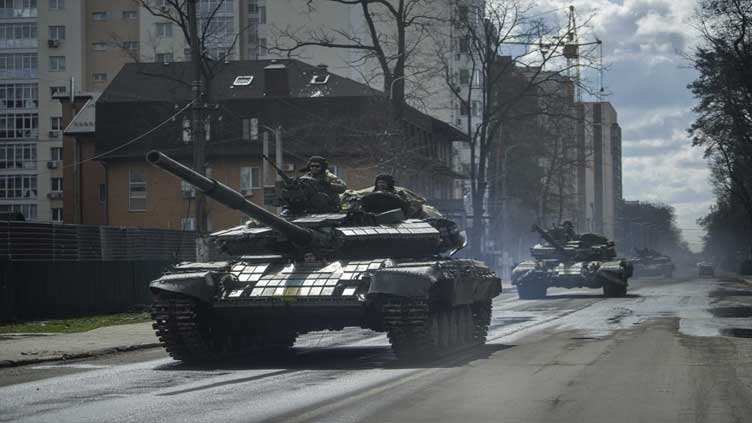 KYIV (AP) — The besieged Ukrainian city of Mariupol yielded up more horrors after six weeks of pummeling by Russian troops, with the mayor saying more than 10,000 civilians have died in the strategic southern port, their corpses “carpeted through the streets.”

As Russia pounds the northeastern city of Kharkiv and prepares for an assault in Ukraine’s east, the country’s president warned President Vladimir Putin’s forces could resort to chemical weapons, and Western officials said they were investigating an unconfirmed claim by a Ukrainian regiment that a poisonous substance was dropped in Mariupol.

The city has seen some of the heaviest attacks and civilian suffering in the war, but the land, sea and air assaults by Russian forces fighting to capture it have increasingly limited information about what’s happening inside the city.

Speaking by phone Monday with The Associated Press, Mariupol Mayor Vadym Boychenko accused Russian forces of having blocked weeks of attempted humanitarian convoys into the city in part to

Boychenko also gave new details of allegations by Ukrainian officials that Russian forces have brought mobile cremation equipment to Mariupol to dispose of the corpses of victims of the siege. He said Russian forces have taken many bodies to a huge shopping center where there are storage facilities and refrigerators.

“Mobile crematoriums have arrived in the form of trucks: You open it, and there is a pipe inside and these bodies are burned,” the mayor said.

Boychenko spoke from Ukrainian-controlled territory outside Mariupol. The mayor said he had several sources for his description of the alleged methodical burning of bodies by Russian forces in the city, but did not detail the sources.

The discovery of large numbers of apparently massacred civilians after Russian forces retreated from cities and towns around the capital, Kyiv, already has prompted widespread condemnation and accusations that Russia is committing war crimes in Ukraine.

Those forces withdrew after they were failed to take Kyiv in the face of stiff Ukrainian resistance, and they now say they will focus on the Donbas, an industrial region in Ukraine’s east. Western officials have pointed to signs Russia’s military is gearing up for a major offensive there.

On a visit to Russia’s Far East on Tuesday, President Vladimir Putin the Russian military would achieve its goals in Ukraine, saying the campaign was aimed at ensuring Russia’s security. He added that his country had no intention to isolating itself and that foreign powers wouldn’t succeed in isolating it — despite a raft of sanctions against Russia.

Putin’s visit to the Vostochny space launch facility marked his first trip outside Moscow since Russia’s invasion on Feb. 24.

The British Defense Ministry said Russian forces are continuing to pull out of Belarus to support operations in eastern Ukraine.

“Fighting in eastern Ukraine will intensify over the next two to three weeks as Russia continues to refocus its efforts there,” the ministry said in a tweet. “Russian attacks remain focused on Ukrainian positions near Donetsk and Luhansk with further fighting around Kherson and Mykolaiv and a renewed push toward Kramatorsk.”

The Donbas has been torn by fighting between Russian-allied separatists and Ukrainian forces since 2014, and Russia has recognized the separatists’ claims of independence. Military strategists say Russian leaders appear to hope local support, logistics and terrain in the Donbas favor Russia’s larger and better-armed military, potentially allowing Russian troops to finally turn the tide decisively in their favor in a way they have struggled to thus far.

Russia has appointed a seasoned general to lead its renewed push in the Donbas, but questions remain about the ability of depleted and demoralized Russian forces to conquer much ground.

With their offensive in many parts of the country thwarted, Russian forces have relied increasingly on bombarding cities — a strategy that has flattened many urban areas and killed thousands of people. And Western officials have repeatedly warned that Putin could resort to using unconventional weapons, particularly chemical agents. The warnings were part of campaign by U.S.
and U.K. authorities to release intelligence findings about Russian plans, in part as a deterrent.

Zelenskyy repeated that warning in his nightly address Monday. “We take this as seriously as possible,” Zelenskyy said.

A Russia-allied separatist official, Eduard Basurin, appeared to urge their use Monday, telling Russian state TV that Russian-backed forces should seize a giant metals plant in Mariupol from Ukrainian forces by first blocking all the exits out of the factory. “And then we’ll use chemical troops to smoke them out of there,” he said.

A Ukrainian regiment defending the plant claimed Monday, without providing evidence, that a drone had dropped a poisonous substance in Mariupol. It indicated there were no serious injuries.
The claim by the Azov Regiment, a far-right group now part of the Ukrainian military, could not be independently verified.

Basurin was quoted by the Interfax news agency as saying Tuesday that the separatist forces “haven’t used any chemical weapons in Mariupol.”

Pentagon spokesman John Kirby said in a statement that the U.S. could not confirm the drone report out of Mariupol. But Kirby noted the administration’s persistent concerns “about Russia’s potential to use a variety of riot control agents, including tear gas mixed with chemical agents, in Ukraine.”

There seemed little diplomatic progress toward ending a war that has driven more than 10 million Ukrainians from their homes, more than 4 million of them from the country.
Ukrainian authorities accuse Russian forces of c
ommitting atrocities, including a massacre in the town of Bucha, outside Kyiv, airstrikes on hospitals and a missile attack that killed at least 57 people last week at a train station.

The U.N. children’s agency said nearly two-thirds of all Ukrainian children have fled their homes in the six weeks since Russia’s invasion began. The United Nations has verified 142 children have been killed and 229 injured, though the actual numbers are likely much higher.

In Mariupol, about 120,000 civilians are in dire need of food, water, warmth and communications, the mayor said.

Ukraine accuses Russian forces of forcibly removing people from the city to Russia. Ukrainian officials say Russian troops are confiscating passports from Ukrainian citizens, then moving them to “filtration camps” in Ukraine’s separatist-controlled east before sending them to distant, economically depressed areas in Russia.

Boychenko said Monday that those who did not pass the “filtering” have been moved to improvised prisons. He said 33,000 people or more have been taken to Russia or separatist territory in Ukraine.

Russian has denied moving people against their will.
Austrian Chancellor Karl Nehammer met Putin on Monday after a weekend meeting with Zelenskyy in Kyiv, but struck a pessimistic note after what he said were “very direct, open and tough” talks. He said he walked away from the meeting without much optimism for an end to the war any time soon.