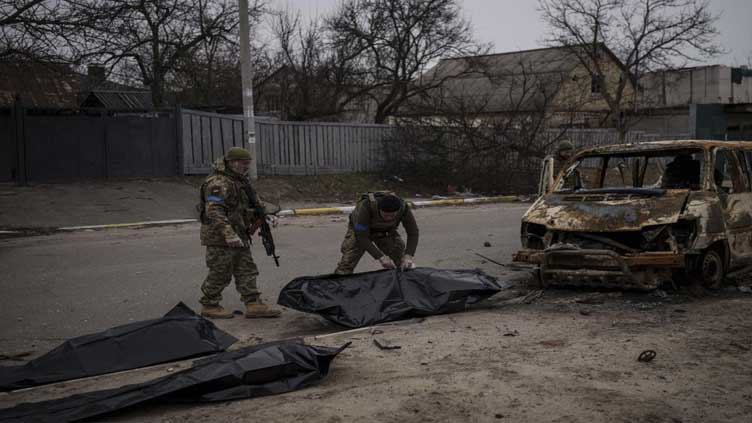 KYIV (AP) — Western governments prepared Wednesday to toughen sanctions against Russia and send more weapons to Ukraine, after President Volodymyr Zelenskyy pointedly accused the world of failing to end Moscow’s invasion of his country and what he said was a campaign of murders, rapes and wanton destruction by Russian forces.

In scarred and silent streets of ruined towns around Ukraine’s capital, investigators collected evidence documenting what appeared to be widespread killings of civilians. Specialists cleared mines from devastated towns near Kyiv that Russian troops have left, as Moscow regrouped its forces for a new assault on Ukraine’s east and south at the end of the war’s sixth week.

In Andriivka, a small village about 60 kilometers (40 miles) west of the capital, two police officers from the nearby town of Makariv came to identify a dead man, whose body was left in a field, next to tracks of a Russian tank left in the area.

Capt. Alla Pustova said officers had found 20 bodies in Makariv area in the last two days, as investigators work to understand the scale of atrocities they say retreating Russian forces committed around the capital.

Zelenskyy said that civilians had been tortured, shot in the back of the head, thrown down wells, blown up with grenades in their apartments and crushed to death by tanks while in cars. He told the U.N. Security Council on Tuesday that those responsible should immediately be brought up on war crimes charges in front of a tribunal like the one established at Nuremberg after World War II.

“There is no security,” he told the body. “So where is the peace that the United Nations was created to guarantee?”

Ukrainian authorities have said the bodies of at least 410 civilians have been found in towns around Kyiv, and the Ukrainian president challenged the U.N. to kick Russia off the Security Council and “do everything that we can do to establish peace.”
Barring that, he told the council: “Dissolve yourself.”

Thwarted in the their efforts to take the capital and forced to withdraw to Belarus or Russia to regroup, President Vladimir Putin’s forces are now pouring into Ukraine’s industrial eastern heartland of the Donbas, where the Ukraine military has said is it bracing for a new offensive.

Overnight, Russian forces attacked a fuel depot and a factory in Ukraine’s Dnipropetrovsk region, just west of the Donbas, the region’s governor, Valentyn Reznichenko, said on the messaging app Telegram early Wednesday. He said the oil depot was destroyed. The number of casualties was unclear.

In the Luhansk region, which lies in the Donbas, shelling of Rubizhne on Tuesday killed one person and wounded five more, regional governor Serhiy Haidai said on Telegram.

Parts of Luhansk and the other Donbas region of Donetsk have been under control of Russia-backed rebels since 2014 and are recognized by Moscow as independent states. So far, Ukrainian forces have held back Russian troops pushing into the area but remain outnumbered in both troops and equipment, Zelenskyy said in a video address to his country late Tuesday.

Over the past few days, grisly images of civilians apparently killed by Russian forces in Bucha and other towns before they withdrew from the outskirts of Kyiv have caused a global outcry. Western nations have expelled scores of Moscow’s diplomats and are expected to roll out more sanctions Wednesday amid a flurry of meetings of NATO, Group of Seven and European Union diplomats.

Measures will include a ban on all new investment in Russia, a senior U.S. administration official said, speaking on condition of anonymity to discuss the upcoming announcement.

The EU’s executive branch, meanwhile, proposed a ban on coal imports from Russia, worth an estimated 4 billion euros ($4.4 billion) per year. It would be the first time the 27-nation bloc has sanctioned the country’s lucrative energy industry over the war, though it may stop short of cutting off Russia’s lucrative oil and gas exports to Europe.

Zelenskyy said Western sanctions must go much further.
“After the things the world saw in Bucha, sanctions against Russia must be commensurate with the gravity of war crimes committed by the occupiers,” he said in his late-night address.

Russia has insisted its troops have committed no war crimes.
Moscow’s U.N. ambassador, Vassily Nebenzia, said “not a single local person” suffered from violence while Bucha was under Russian control. Using to a tactic Russian officials have often relied on in the face of accusations of atrocities, he said scenes of bodies in the streets were “a crude forgery” staged by the Ukrainians.

In the still largely empty streets of Bucha, dogs wandered among ruined buildings and burned military vehicles. Officials snapped photos of the corpses before gathering some of them.

Associated Press journalists in Bucha counted dozens of corpses in civilian clothes and interviewed Ukrainians who told of witnessing atrocities. Many of the dead seen by AP journalists appeared to have been shot at close range, and some had their hands bound or their flesh burned.

High-resolution satellite imagery from Maxar Technologies showed many of the bodies laid in the open for weeks while Russian forces were in the town.

The dead in Bucha included a pile of six charred bodies, as witnessed by AP journalists. It was not clear who they were or how they died. One body was probably that of a child, said Andrii Nebytov, head of police in the Kyiv region.

The AP and the PBS series “Frontline” have jointly verified at least 90 incidents during the war that appear to violate international law. The chief prosecutor for the International Criminal Court at The Hague opened an investigation a month ago into possible war crimes in Ukraine.

Elsewhere in Ukraine, a passerby in the besieged southern city of Mykolaiv stopped briefly to look at the bright blossoms of a shattered flower stand lying among bloodstains, the legacy of a Russian shell that killed nine people in the city’s center. The onlooker sketched the sign of the cross in the air, and moved on.
British defense officials, meanwhile, said Wednesday that 160,000 people remain trapped by Russian air strikes and heavy fighting in the besieged southern port city of Mariupol, scene of some of the worst suffering of the war.

The Ministry of Defense intelligence update said the city has “no light, communication, medicine, heat or water.” It accused Russian forces of deliberately preventing humanitarian access, “likely to pressure defenders to surrender.”

Ukraine’s Deputy Prime Minister Iryna Vereshchuk said Russian forces stopped buses accompanied by Red Cross workers from traveling to the city, which had a pre-war population of over 400,000. She said Russian troops allowed 1,496 civilians to leave the Sea of Azov port on Tuesday.