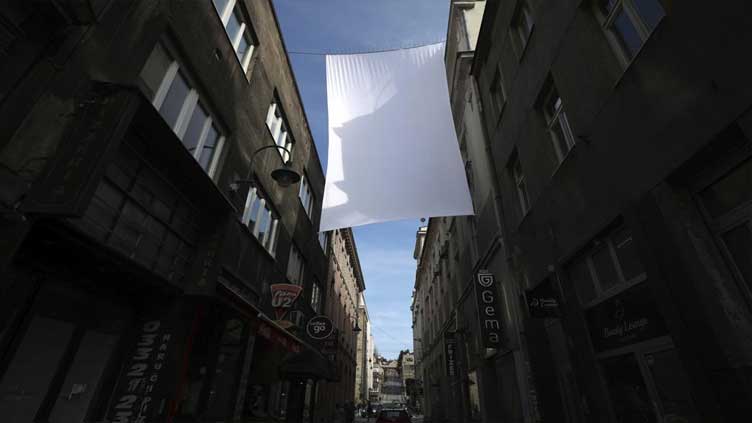 SARAJEVO (AP) — Sarajevo was paying a subdued tribute this week to the resilience of its citizens who survived the longest military siege in modern history, and commemorating thousands of others who did not.

Many of the survivors said they found the 30th anniversary of the start of the siege of the Bosnian capital particularly hard because they were marking it against the backdrop of what they described as similar suffering being inflicted on civilians in Ukraine by Russia’s occupying army.

Bosnian Serb forces, armed and backed by neighboring Serbia, laid siege to Sarajevo on April 6, 1992, during the bloody breakup of Yugoslavia. For the next 46 months, about 350,000 residents remained trapped in their multiethnic city, subjected to daily shelling and sniper attacks and cut off from regular access to electricity, food, water, medicine and the outside world. They survived on limited humanitarian supplies provided by the United Nations, drank from wells and foraged for food.

“The world used to watch us suffer and now we just watch (Ukrainians) suffer and there is nothing we can do to help them,” said Arijana Djidelija, a 52-year-old primary school teacher. “It is a very strange and difficult feeling,” she added.

Djidelija was a newly employed, young teacher when the siege of Sarajevo began, and she immediately joined a local volunteer effort to educate tens of thousands of children who remained trapped in the city.

As Serb gunners took positions on the hills surrounding Sarajevo and trained their guns at its schools, hospitals, markets and residential buildings for nearly four years, Djidelija and her colleagues held classes in improvised classrooms, set up in basements and abandoned shops or apartments around the city, risking their lives for education.

In the winter of 1993, a mortar slammed into one of Djidelija’s school’s improvised classrooms in the Sarajevo suburb of Dobrinja, killing her colleague Fatima Gunic and three children, all under 10.
But the war schools, classroom friends and teachers were the only “semblance of a normal life” Sarajevo children had at the time, Djidelija said, so “after crying and honoring our dead, we continued to teach, such was our will to protect the sanity of our young, to give them an education.”

Similar acts of defiance are being honored this week in numerous exhibitions, art installations, concerts and performances in Sarajevo. At the start of the week, a large piece of white cloth was suspended by local artists between the residential buildings flanking one of the busiest street crossings in downtown Sarajevo.
A similar cloth stood there and in other urban intersections during the siege to hide terrified Sarajevans from Serb snipers and gunners deployed around their city. This week, the fabric is being used to project wartime photographs of Sarajevo civilians running for cover from or falling victims to Serb snipers.

More than 11,000 people, including over 1,000 children, were killed by snipers and mortars as they went about their daily lives in Sarajevo during the siege. Countless others were wounded.

When the war began, most Sarajevo men of fighting age abandoned their jobs to join a ragtag volunteer army controlled by the country’s multiethnic government which defended the city against the takeover by Bosnian Serb rebels. Others offered their special skills for the defense of their city.

“I could have left, but I never regretted the decision to stay in Sarajevo and help it survive,” said Dr. Dragan Stevanovic, a recently retired internist, who spent the war years treating hundreds of sick and injured civilians and soldiers in one of the city’s two main hospitals.

“We had no electricity nor most other things that a modern hospital and normal operating theaters need to function. There was no light, no heating, we could not properly sterilize medical instruments, we had no elevators, we had nothing” Stevanovic recalled, his voice trailing off.

“But we improvised, and we did it well,” he quickly added. Surgeons, he said, performed surgeries in the windowless basement of his hospital — one of the Serbs’ favorite targets during the siege — sometimes under candlelight, doctors and nurses boiled surgical instruments and bedding in large barrels of water to sterilize them.

Being a direct witness to the physical suffering of his city’s residents, Stevanovic said, was a painful, but also a pride-inspiring experience.

“It proved to me that what we were told in school was true, that everything a man wills is possible, that medicine is much more than what one can find in textbooks and the rules of the medical profession,” he added.

Still, it makes the ongoing struggle of Ukrainian health care professionals to do their jobs under Russian bombardment “all too familiar and thus very painful,” Stevanovic said.

Similar sentiment was echoed by Mirsad Palic, 58, as he waited Monday evening to be served a small plate of pasta boiled in hot water, without spices or sauce, under a tent erected in central Sarajevo for a commemorative presentation of the city’s wartime cuisine.

Palic recalled how in May 1993 his wife gave birth to their first child, a son, in a makeshift clinic set up in the basement of a local administration building in their Sarajevo neighborhood. “I panicked because I could not believe that my first child would be born in a dark basement, on top of a wooden desk, but it was all over in 20 minutes and we were sent back home with our baby.”

In 1995, in the final months of the war which he had spent as a Bosnian army soldier, witnessing many of his brothers in arms getting killed or mutilated inside the city and on the front lines around it, Palic’s wife gave birth to his second child — a daughter.

“I am afraid that the war did not affect only those of us who remember it well, but that we are also transferring our traumas onto our kids,” Palic said.

He added that these days he is doing his best to shield his now-adult children from the television images of Ukrainian civilians brutally killed in their cities by Russian soldiers, “to allow them to have a more cheerful, less frightening life than mine.”

“They do not have to share my fear that this new, familiarly brutal war in Europe will spread out, reach us and send us back to where we were,” three decades ago, he added.