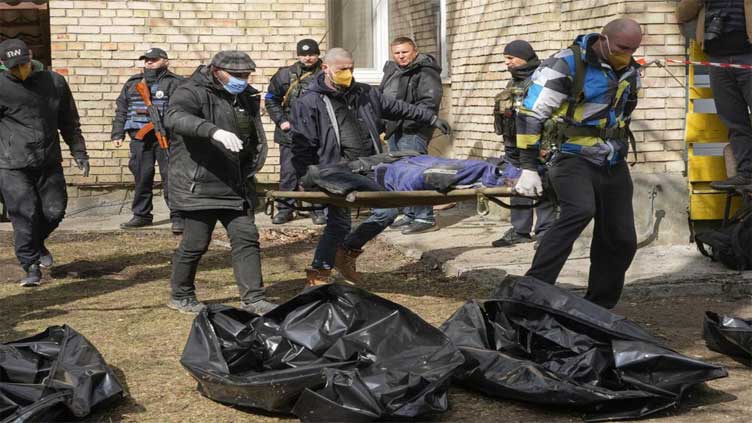 BUCHA (AP) — Ukraine’s president planned to address the U.N.’s most powerful body on Tuesday after even more grisly evidence emerged of civilian massacres in areas that Russian forces recently left. Western nations expelled dozens more of Moscow’s diplomats and weighed further sanctions as they expressed their revulsion at what they say are war crimes.

President Volodymyr Zelenskyy’s speech to the Security Council will be rich with symbolism, but the invite and other displays of Western support are unlikely to alter the situation on the ground. He says his forces desperately need more powerful weaponry, some of which the West has been reluctant to give. Russia’s veto guarantees the body will take no action, and it was unclear whether its representatives would even remain in the chamber for the video address.

Ukrainian officials said the bodies of at least 410 civilians have been found in towns around Kyiv that were recaptured from Russian forces and that a “torture chamber” was discovered in the town called Bucha, from which some of the grimmest details have emerged.

Associated Press journalists in Bucha have counted dozens of corpses in civilian clothes. Many appeared to have been shot at close range, and some had their hands bound or their flesh burned. A mass grave in a churchyard held bodies wrapped in plastic. The Ukrainian prosecutor-general’s office said the bodies of five men with their hands bound were found in the basement of a children’s sanatorium where civilians were tortured and killed.

High-resolution satellite imagery by commercial provider Maxar Technologies showed that many of the bodies had been lying in the open for weeks, during the time that Russian forces were in the town. The New York Times first reported on the images showing the dead.

Russia has repeatedly rejected the allegations, with Foreign Minister Sergey Lavrov dismissing the scenes outside Kyiv as a “stage-managed anti-Russian provocation.”
Russia has sought to refute similar accusations against its forces in the past by accusing its enemies of forging photos and video, and of using so-called crisis actors. Western officials and independent reporters say Russia spreads disinformation to mask its actions.

In another show of support, European Union Commission President Ursula von der Leyen plans to travel to Kyiv to meet with Zelenskyy this week. The 27-nation EU has been a steadfast backer of Ukraine since the Russian invasion began on Feb. 24 and has already pushed through four rounds of sanctions. A fifth round is being considered this week.

But Western nations are divided over how far to go. Some are calling for a boycott of Russian oil and gas imports, while Germany and others fear that such a move could plunge the continent into a severe economic crisis. And countries from the NATO alliance have refused to hand over some of the most powerful weaponry Zelenskyy has asked for, like fighter jets.

Their provision of other weapons and equipment has been credited with helping Ukraine mount a stiffer than expected resistance to Russia’s superior firepower.

That resistance stopped Russian forces from overrunning the capital, and their troops are now in retreat from areas around Kyiv. About two-thirds of the Russian troops around the city have left and are either in Belarus or on their way there, said a U.S. defense official who spoke on condition of anonymity to discuss an intelligence assessment.

The official said they were probably getting more supplies and reinforcements. Other Western and Ukrainian officials have warned many are merely regrouping. Some are already redeploying to the east, where Russian-backed separatists have been battling Ukrainian forces in the Donbas region since 2014.

Zelenskyy appealed again Monday for more weaponry to face down this coming offensive.

“If we had already got what we needed — all these planes, tanks, artillery, anti-missile and anti-ship weapons — we could have saved thousands of people,” he said.

The president’s video addresses to European capitals have become near daily affairs and have helped to rally military, financial and diplomatic support for his country — but the speech to the Security Council could be even more dramatic, with all eyes the reaction of any Russian representatives present.

The Ukrainian military says that, in the Donbas, Russia is focused on seizing the cities of Popasna and Rubizhne in the Donetsk and Luhansk regions and the Azov Sea port of Mariupol, which has seen weeks of heavy fighting at a staggering cost to the city and its residents.

“The enemy is regrouping troops and concentrating its efforts on preparing an offensive operation in the east of our country,” it said in a statement. “The goal is to establish full control over the territory of Donetsk and Luhansk regions,” which Russia has recognized as independent.

Ukrainian Deputy Prime Minister Iryna Vereshchuk said seven humanitarian corridors will be open on Tuesday, including from besieged Mariupol, where 1,500 civilians were able to escape in private vehicles on Monday, as well as the Russian-controlled Berdyansk.

But it was not immediately clear whether Russia has agreed to halt the fighting along the corridors. Previous efforts to bring civilians to safety through humanitarian corridors have failed because of renewed fighting.

An international Red Cross team gave up on entering Mariupol at least for Tuesday, after several days of trying to deliver aid to the besieged city and help escort civilians out.

The International Committee of the Red Cross said the team was held overnight held by police in Manhush, west of Mariupol, but later released. It did not identify the nationality of the police, but Manhush has been under Russian control for weeks.