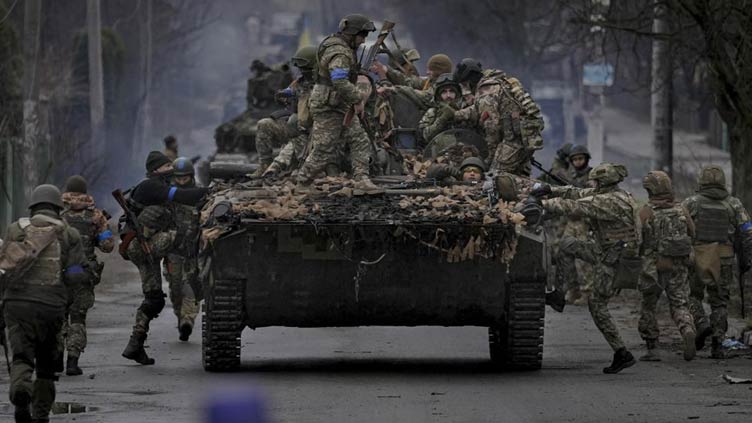 BUCHA (AP) — Ukrainian troops are finding brutalized bodies and widespread destruction in suburbs of the capital as Russian soldiers withdraw and Moscow focuses its attacks elsewhere, including missile strikes Sunday that targeted fuel and ammunition supplies in southern and eastern Ukraine.

Associated Press journalists in Bucha, a small city northwest of Kyiv, saw the bodies of at least nine people in civilian clothes who appeared to have been killed at close range. At least two had their hands tied behind their backs. The AP also saw two bodies wrapped in plastic, bound with tape and thrown into a ditch.

Authorities said they were documenting evidence as Ukraine’s military reclaims territory and discovers indications of execution-style slayings to add to their case for for prosecuting Russian officials for war crimes.

Oleksiy Arestovych, an adviser to Ukrainian President Volodymyr Zelenskyy, said scores of killed civilians were found on the streets of Bucha and the Kyiv suburbs of Irpin and Hostomel in what looked like a “scene from a horror movie.”

Arestovych said some people were shot in the head and had their hands bound, and some bodies showed signs of torture, rape and burning.

The capital city’s mayor, Vitali Klitschko, said civilians were “shot with joined hands” and told German newspaper Bild that “what happened in Bucha and other suburbs of Kyiv can only be described as genocide.”

A day earlier, AP journalists witnessed Ukrainian soldiers gingerly removing at least six bodies from a street in Bucha with cables in case the Russians had booby-trapped corpses with explosives before their withdrawal. Local residents said the dead people were civilians killed without provocation, a claim that could not be independently verified.

Klitschko called on other nations to immediately end Russian gas imports, saying they were funding the invasion of Ukraine, now in its 39th day.

“Not a penny should go to Russia anymore. That’s bloody money used to slaughter people. The gas and oil embargo must come immediately,” the mayor said.

Charles Michel, president of the European Council, wrote on Twitter that he was shocked by the “haunting images of atrocities committed by Russian army” in the capital region. The EU and non-governmental organizations were assisting in the effort to preserve evidence of war crimes, according to Michel, who promised “further EU sanctions” against Russia.

On Sunday morning, Russian forces launched an airstrike on the Black Sea port of Odesa, in southern Ukraine, sending up clouds of dark smoke that veiled parts of the city. The Russian military said the targets were an oil processing plant and fuel depots around Odesa, which is Ukraine’s largest port and home to its navy.

“I live in that eight-floor building. At six in the morning, Russia launched an attack, and this piece of rock reached my house,” said Maiesienko Ilia, who lives near one of the targeted facilities.

The Odesa city council said Ukraine’s air defense shot down some missiles before they hit the city. Ukrainian military spokesman Vladyslav Nazarov said there were no casualties from the attack.

The smaller port of Mariupol, located to the east on the Sea of Azov, remained cut off from the rest of the country as Russian and Ukrainian soldiers fought for control of the besieged city. About 100,000 civilians -less than a quarter of the prewar population of 430,000 - are believed to be trapped there with little or no food, water, fuel and medicine,

The International Committee of the Red Cross said it hoped a team of nine staffers and three vehicles it sent Saturday to help evacuate residents would reach Mariupol on Sunday but cautioned, “The situation on the ground is volatile and subject to rapid changes.”

Ukrainian authorities said Russia agreed days ago to allow safe passage from the city, which has been the site of some of the worst attacks and greatest suffering, but similar agreements have broken down repeatedly under continued shelling.

Mariupol is in the mostly Russian-speaking Donbas region, where Moscow-backed separatists have fought Ukrainian troops for eight years. Its capture would create an unbroken land corridor from Russia to Crimea, which Moscow seized from Ukraine in 2014.

With Mariupol squarely in Russia’s crosshairs, Ukraine insisted it had gained a leg up elsewhere in the country. As his country’s troops retook territory north of the capital of Kyiv from departing Russian troops, President Volodymyr Zelenskyy called on all Ukrainians to do whatever they could “to foil the enemy’s tactics and weaken its capabilities.”

“Peace will not be the result of any decisions the enemy makes somewhere in Moscow. There is no need to entertain empty hopes that they will simply leave our land. We can only have peace by fighting,” Zelenskyy said late Saturday.

Zelenskyy and Ukraine’s Western allies believe Russia has shifted its forces from the capital region and the country’s north in order to build strength in the east and south. The Ukrainian leader again urged the West to supply his military with warplanes and more anti-missile systems.

“Every Russian missile that hits our cities and every bomb dropped on our people, on our children, only adds black paint to the history that will describe everyone on whom the decision depended - the decision of whether to help Ukraine with modern weapons,” Zelenskyy said.

While the geography of the battlefield morphed, little changed for many Ukrainians more than five weeks into a war that has sent more than 4 million people fleeing the country as refugees and displaced millions more from their homes.

The regional governor in Kharkiv, said Sunday that Russian artillery and tanks performed over 20 strikes on Ukraine’s second-largest city and its outskirts in the country’s northeast over the past day. Gov. Oleh Synyehubov said a missile strike on the city of Lozovo wounded four people and that Russian tanks bombarded a hospital in the town of Balakliia.

Zelenskyy alleged Saturday that Russian troops have left mines around homes, abandoned equipment and even the bodies of the dead as they withdraw from around Kyiv. Those claims could not be independently verified, but Ukrainian troops were seen heeding the warning.

In towns and cities surrounding Kyiv, signs of fierce fighting were everywhere in the wake of the Russian redeployment. Destroyed armored vehicles from both armies lay in streets and fields along with scattered military gear.

Ukrainian troops were stationed at the entrance to Antonov Airport in the suburb of Hostomel, demonstrating control of the runway that Russia tried to storm in the first days of the war.

Inside the compound, the Mriya, one of the biggest planes ever built, lay wrecked underneath a hangar pockmarked with holes from the February attack.

The head of Ukraine’s delegation in talks with Russia said Moscow’s negotiators informally agreed to most of a draft proposal discussed during face-to-face talks in Istanbul this week, but no written confirmation has been provided.

The Ukrainian negotiator, Davyd Arakhamia said on Ukrainian TV that he hoped the was developed enough so that the two countries’ presidents can meet to discuss it. But the top Russian negotiator in talks with Ukraine, Vladimir Medinksy, was quoted by Interfax as saying that it’s too early to talk about a meeting between the two leaders.

Ukrainian authorities warned that Russia’s focus on eastern Ukraine did not mean Kyiv and other cities wouldn’t become targets again. In his evening address Saturday, Zelenskyy called for his people to do whatever they can to ensure the country’s survival, even by engaging in acts as simple as showing each other kindness.

“When a nation is defending itself in a war of annihilation, when it is a question of life or death of millions, there are no unimportant things. ... And everyone can contribute to a victory for all,” the president said.