Heavy fighting rages near Kyiv as Russia appears to regroup 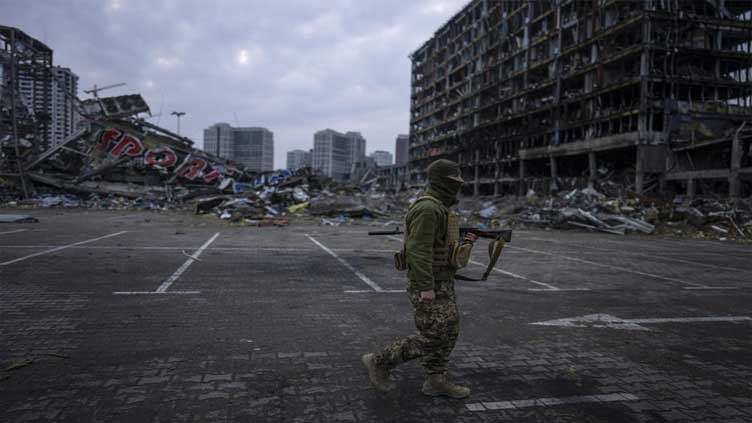 Heavy fighting rages near Kyiv as Russia appears to regroup

KYIV (AP) — Heavy fighting raged on the outskirts of Kyiv and other zones Thursday amid indications the Kremlin is using talk of de-escalation as cover while regrouping and resupplying its forces and redeploying them for a stepped-up offensive in eastern Ukraine.

Ukrainian President Volodymyr Zelenskyy said in an early morning video address that Ukraine is seeing “a buildup of Russian forces for new strikes on the Donbas, and we are preparing for that.”

Meanwhile, a convoy of buses headed to Mariupol in another bid to evacuate people from the besieged port city after the Russian military agreed to a limited cease-fire in the area. And a new round of talks aimed at stopping the fighting was scheduled for Friday.

The Red Cross said its teams were headed for Mariupol with medical supplies and other relief and hoped to take civilians out of the beleaguered city. Tens of thousands have managed to get out in the past few weeks by way of humanitarian corridors, reducing the city’s population from a prewar 430,000 to an estimated 100,000 as of last week, but other efforts have been thwarted by continued Russian attacks.

At the same time, Russian forces shelled suburbs of Kyiv that Ukraine recently retook control of, a regional official said, two days after the Kremlin announced it would significantly scale back operations near both the capital and the northern city of Chernihiv to “increase mutual trust and create conditions for further negotiations.”

Britain’s Defense Ministry also reported “significant Russian shelling and missile strikes” around Chernihiv. The area’s governor, Viacheslav Chaus, said Russian troops were on the move but may not be withdrawing.

Russia’s Defense Ministry also reported new strikes on Ukrainian fuel stores late Wednesday, and Ukrainian officials said there were artillery barrages in and around the northeastern city of Kharkiv over the past day.

Despite the fighting raging in those areas, the Russian military said it committed to a cease-fire along the route from Mariupol to the Ukraine-held city of Zaporizhzhia.

Ukrainian Deputy Prime Minister Iryna Vereshchuk said 45 buses would be sent to collect civilians who have suffered some of the worst privations of the war.

Food, water and medical supplies have all run low during a weekslong blockade and bombardment of the city. Civilians who have managed to leave have typically done so using private cars, but the number of drivable vehicles left in the city has dwindled and fuel is low.