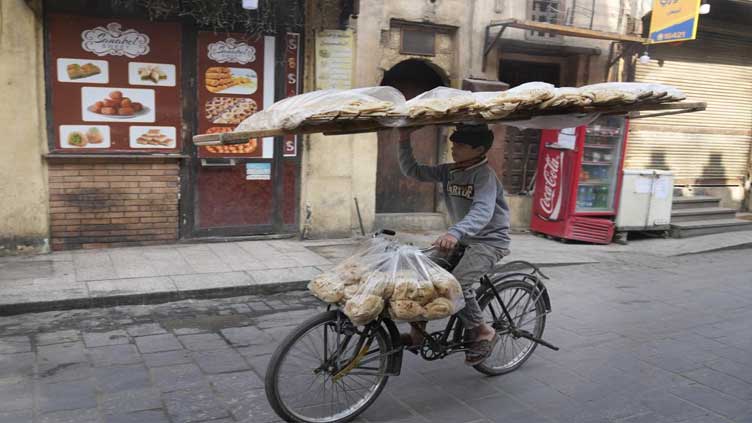 BEIRUT (AP) — Layal Aswad was already exhausted by Lebanon’s devastating two-year economic collapse. Now, as Russia’s invasion of Ukraine sends food and energy prices soaring even further, she finds herself struggling to put food on the table for her family of four.

“Even bread is not something we take for granted anymore,” said the 48-year-old housewife, standing recently in a supermarket aisle in front of gallons of cooking oil whose prices had risen to an all-time high.

From Lebanon, Iraq and Syria to Sudan and Yemen, millions of people in the Middle East whose lives were already upended by conflict, displacement and poverty are now wondering where their next meals will come from. Ukraine and Russia account for a third of global wheat and barley exports, which countries in the Middle East rely on to feed millions of people who subsist on subsidized bread and bargain noodles. They are also top exporters of other grains and the sunflower seed oil that is used for cooking.

Even before the war in Ukraine, people in countries across the Middle East and North Africa were not getting enough food to eat. Now with trade disruptions spurred by the conflict, more commodities are becoming either unaffordable or unavailable.

“Put simply, people cannot afford food of the quality or quantity that they need, with those in conflict- and crisis-affected countries ... at greatest risk,” said Lama Fakih, Middle East and North Africa Director at Human Rights Watch.

A similar set of circumstances led to a series of uprisings starting in late 2010 known as the Arab Spring, when skyrocketing bread prices fueled anti-government protests across the Middle East, noted Kristalina Georgieva, managing director of the International Monetary Fund.

“When prices jump, and poor people cannot feed their families, they will be on the streets,” Georgieva remarked Sunday at the Doha Forum, a policy conference in Qatar.

In Iraq and Sudan, public frustration at food prices and a lack of government services erupted in street protests on several occasions over the past several weeks.

“People have a right to food, and governments should do everything in their power to protect that right, otherwise we risk not only food insecurity but the insecurity and instability that gross deprivation on this scale could trigger,” Fakih said.

The war also has sparked concern that much of the international aid upon which so many in the Arab world depend will be diverted to Ukraine, where more than 3.7 million people have fled the war, Europe’s largest exodus since World War II.

“For the millions of Palestinians, Lebanese, Yemenis, Syrians, and others who live in countries experiencing conflict, catastrophic economic meltdowns, and increasing humanitarian needs, this would be equivalent to shutting down critical life support,” states an analysis released by Carnegie Middle East experts last week.

In Syria, 14.6 million people will depend on assistance this year, 9% more than in 2021 and 32% more than in 2020, Joyce Msuya, the United Nations’ assistant secretary-general for humanitarian affairs and deputy emergency relief coordinator, told the U.N. Security Council in February.

In Yemen, basic needs are becoming even harder to meet for millions of impoverished people after seven years of war. A recent report by the U.N. and international aid groups estimated that more than 160,000 people in Yemen were likely to experience famine-like conditions in 2022. That number could climb much higher still because of the war in Ukraine. A U.N. appeal for the country earlier this month raised $1.3 billion, less than a third of what was sought.

“I have nothing,” said Ghalib al-Najjar, a 48-year-old Yemeni father of seven whose family has lived in a refugee camp outside the rebel-held capital of Sanaa since fleeing fighting in their middle-class neighborhood more than four years ago. “I need flour, a package of flour. I need rice. I need sugar. I need what people need (to survive).”

In Lebanon, which has been in the throes of economic collapse for the past two years, panic has set in among a population worn down by shortages of electricity, medicine and gasoline.
The country’s main grain silos were destroyed by a massive explosion at a Beirut port in 2020. Now, with just six weeks of wheat reserves, many fear even darker days ahead. Several large supermarkets were out of flour and corn oil this week.

“Whatever is put on shelves is being bought,” said Hani Bohsali, head of the food importers syndicate. He said 60% of the cooking oil consumed in Lebanon comes from Ukraine and the rest comes mostly from Russia.

“This is not a small problem,” he said. Bohsali noted that a search is underway for alternative places from which to import needed products, but he said other countries have either banned food exports or significantly raised prices.

Meanwhile, 5 liters (1 gallon) of cooking oil in Lebanon now costs around the same as the monthly minimum wage, which is still fixed at 675,000 Lebanese pounds, or $29, despite the currency having lost around 90% of its value since October 2019. Families, including Aswad’s, also are spending ever larger portions of their monthly income on neighborhood generators that light up their homes for most of the day in the absence of state-supplied electricity. Even those are threatening to shut down now, saying they can no longer afford to buy fuel on the market.

“We are back to the Stone Age, stocking up on candles and things like toast and Picon (a processed cheese brand) in case we run out of everything,” Aswad said.

In Syria, where more than 11 years of brutal war has left more than 90% of the country’s population living in poverty, products such as cooking oil — when they can be found — have doubled in price in the month since the war began in Ukraine. On a recent day at one government cooperative in the capital of Damascus, shelves were almost empty except for sugar and napkins.

Egypt, the world’s top importer of wheat, is among the most vulnerable. Economic pressures, including rising inflation, are mounting in the country, where about a third of the population of more than 103 million lives below the poverty line, according to official figures.

An Associated Press journalist who toured markets in three different middle-class neighborhoods in Cairo earlier this month found that the price of food staples such as bread — items that Egyptians refer to as “eish,” or life — have increased by up to 50%. Inflation is likely to swell further due to the upcoming Muslim holy month of Ramadan, typically a time of increased demand.
Consumers have accused merchants of exploiting the war in Ukraine to raise prices even though they have not yet been affected.

“They make profits from our pain,” lamented Doaa el-Sayed, an Egyptian elementary school teacher and mother of three. “I have to reduce the amount of everything I used to buy,” she said.
In Libya, a country wracked by a yearslong civil war, the latest spike in the price of food staples has people worried that tough times are ahead. And in Gaza, prices that had already started to rise skyrocketed after the war in Ukraine erupted, adding an extra challenge to the 2 million residents of the impoverished Palestinian enclave who have endured years of blockade and conflict.

Fayeq Abu Aker, a Gaza businessman, imports staples such as cooking oil, lentils, and pasta from a Turkish company. When the company canceled the cooking oil contract after the war began, Aker turned to Egypt. But despite the country’s proximity to Gaza, prices there were even higher. A box of four bottles of cooking oil now costs $26, double the price before the war.

“In 40 years of my business, I have never seen a crisis like this,” he said.