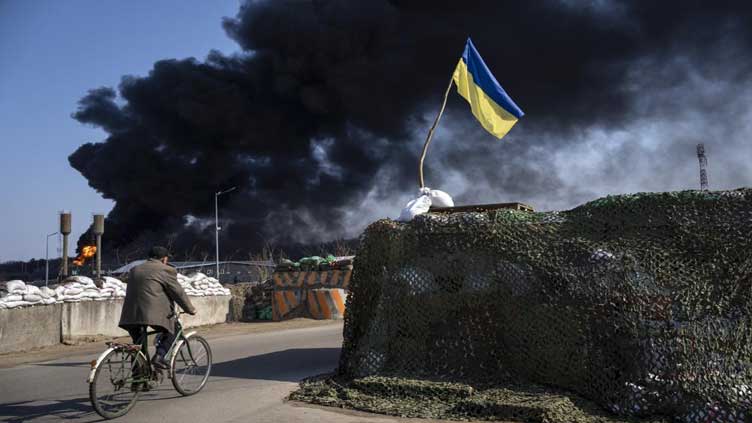 KYIV (AP) — About 300 people were killed in the Russian airstrike last week that blasted open a Mariupol theater, Ukrainian authorities said Friday in what would make it the war’s deadliest known attack on civilians yet.

In a vain attempt to protect the hundreds of people taking cover inside the theater, “CHILDREN” in Russian had been printed in huge white letters on the ground in two places outside the grand, columned building to make it visible from the air.

For days, the government in the besieged and ruined city of Mariupol was unable to give a casualty count for the March 16 attack. In announcing the death toll on its Telegram channel Friday, it cited eyewitnesses. But it was not immediately clear whether emergency workers had finished excavating the ruins of the Mariupol Drama Theater or how witnesses arrived at the figure.

Still, the emerging picture is certain to fuel allegations Moscow has committed war crimes by killing civilians, whether deliberately or by indiscriminate fire. And it could increase pressure on NATO to step up military aid. The alliance has refused so far to supply warplanes or establish a no-fly zone over Ukraine for fear of getting into a war with Russia.

Sullivan, said Friday the reaction to the theater bombing was “just absolute shock, particularly given the fact that it was so clearly a civilian target.” He said it showed “a brazen disregard for the lives of innocent people.”

The scale of devastation in Mariupol, where bodies have been left unburied amid bomb craters and hollowed-out buildings, has made information difficult to obtain.

But soon after the attack, the Ukrainian Parliament’s human rights commissioner said more than 1,300 people had taken shelter in the theater, many of them because their homes had been destroyed. The building had a basement bomb shelter, and some survivors did emerge from the rubble after the attack.

The reported death toll came a day after Biden and allied leaders promised that more military aid for Ukraine is on the way. But they stopped short of providing some of the heavy weaponry that Ukrainian President Volodymyr Zelenskyy said is urgently needed. Zelenskky has pleaded for planes, tanks and no-fly patrols over Ukraine.

The U.S. and the European Union on Friday did announce a move to further squeeze Russia economically: a partnership to reduce Europe’s reliance on Russian energy and dry up the billions of dollars the Kremlin gets from the sale of fuel.

“And the goals are not hidden,” he continued. “They are declared publicly — to destroy, break, annihilate, strangle the Russian economy and Russia on the whole.”

In Ukrainian towns and cities that day by day increasingly resemble the ruins that Russian forces left behind in its campaigns in Syria and Chechnya, the misery for civilians grows ever more acute.

In the capital, Kyiv, ashes of the dead are piling up at the main crematorium because so many relatives have left, leaving urns unclaimed. The besieged northern city of Chernihiv is now all but cut off.

Chernihiv first lost its main road bridge over the Desna River to a Russian airstrike this week. Follow-up shelling damaged a pedestrian bridge, trapping remaining inhabitants inside the city without power, water and heat, authorities said. More than half of Chernihiv’s pre-war population of 285,000 is thought to have fled.

Russia said it would offer safe passage starting Friday to 67 ships from 15 foreign countries that are stranded in Ukrainian ports because of the danger of shelling and mines.

The International Atomic Energy Agency said it has been told by Ukrainian authorities that Russian shelling is preventing worker rotations in and out of the decommissioned Chernobyl nuclear plant.

Russia’s military claimed it destroyed a massive Ukrainian fuel base used to supply the Kyiv region’s defenses, with ships firing a salvo of cruise missiles, according to the Interfax news agency. Videos on social media showed an enormous fireball near the capital.

For the vulnerable — the elderly, children and others unable to join millions heading westward — food shortages loom in a country once known as the breadbasket for the world.

In relentlessly shelled Kharkiv, mostly elderly women lined up stoically to collect food and other urgent supplies this week, as explosions thudded in the distance. Fidgeting with anticipation, a young girl watched as a volunteer’s knife cut through a giant slab of cheese, carving out thick slices, one for each hungry person.

Hanna Spitsyna took charge of divvying up the delivery of food aid from the Ukrainian Red Cross. Those waiting each got a lump of the cheese, dropped into plastic bags that people in line held open.

“Among those who stayed, there are people who can walk on their own, but many who cannot walk, the elderly,” Hanna said. “All these people need diapers, swaddle blankets and food.”