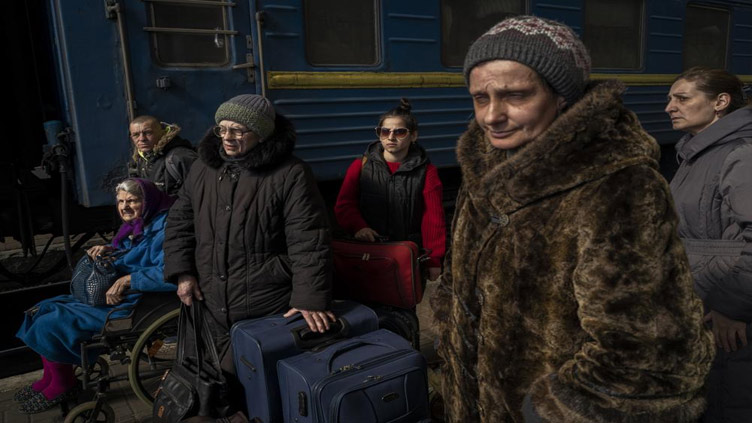 MEDYKA (AP) — Yulia Bondarieva spent 10 days in a basement as Russian planes flew over and bombs were falling on the Ukrainian city of Kharkiv. Having reached safety in Poland, Bondarieva’s only wish now is for her twin sister in the besieged city of Mariupol to get out, too.

“They have been in the basement since Feb. 24, they have not been out at all,” Bondarieva said. “They are running out of food and water.”

Bondarieva managed to speak to her sister on the phone recently. The fear of what will happen to her in the encircled and bombed-out city that is going through some of the worst fighting in the war has been overwhelming.

“She does not know how to leave the city,” the 24-year-old said after arriving in the Polish border town of Medyka.

Mariupol authorities have said only about 10% of the city’s population of 430,000 has managed to flee over the past week. The Mariupol City Council has asserted that several thousand residents were taken into Russia against their will.

Bondarieva said her sister told her of “Russian soldiers walking around the city” in Mariupol, and people not being allowed out.

The battle for the strategic port on the Azov Sea raged on Monday. Russian and Ukrainian soldiers were fighting block-by-block for control of Mariupol, where at least 2,300 people have died, some buried in mass graves.

Maria Fiodorova, a 77-year-old refugee from Mariupol who arrived Monday in Medyka, said 90% of the city has been destroyed. “There are no buildings there (in Mairupol) any more,” she said.

The United Nations says nearly 3.5 million people have left Ukraine since the start of the Russian invasion on Feb. 24, the largest exodus of refugees in Europe since World War II.

Valentina Ketchena arrived by train at the Polish town of Przemsyl. She never thought that at the age of 70 she would be forced to leave her home in Kriviy Rig, and see the town in southern Ukraine almost deserted as people flee the Russian invasion for safety.

Kriviy Rig is now “half empty,” said Ketchena. She will stay now with friends in Poland, hoping to return home soon. “It (is a) very difficult time for everyone.”

Zoryana Maksimovich is from the western city of Lviv, near the Polish border. Though the city has seen less destruction than others, Maksimovich said her children are frightened and cried every night when they had to go to the basement for protection.

”I told my children that we are going to visit friends,” the 40-year-old said. “They don’t understand clearly what is going on but in a few days they are going to ask me about where their father is.”

Like most refugees, Maksimovich had to flee without her husband — men aged 18 to 60 are forbidden from leaving the country and have stayed to fight. “I don’t know how I will explain,” she said.

Once in Poland, refugees can apply for a local ID number that enables them to work and access health, social and other services. Irina Cherkas, 31, from the Poltava region, said she was afraid her children could be targeted in Russian attacks.

“For our children’s safety we decided to leave Ukraine,” she said. “When the war ends we will go back home immediately.”

Poland has taken in most of the Ukrainian refugees, more than 2 million so far. On Sunday evening, Ukrainian artists joined their Polish hosts in a charity event that raised more than $380,000.
The star of the evening was a 7-year-old Ukrainian girl, whose video singing a song from the movie “Frozen” in a Kyiv bomb shelter has gone viral and drawn international sympathy.

Wearing a white, embroidered folk dress, Amellia Anisovych, who escaped to Poland with her grandmother and brother, sang the Ukrainian anthem in a clear, sweet voice as thousands of people in the audience waved their cellphone lights in response.