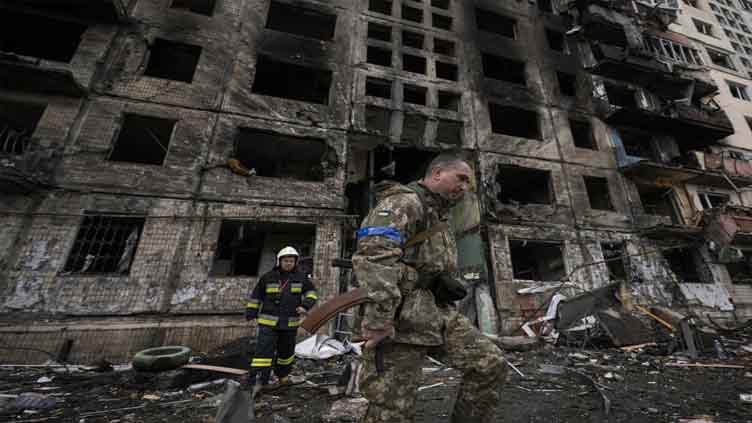 (AP) - Russian troops kept up pressure on Ukraine’s capital city on Monday and air raid sirens were heard across the besieged country overnight, even as both nations were expected to resume diplomatic talks.

The attacks around Kyiv came a day after Russia escalated its offensive by shelling areas close to the Polish border. The Ukrainian military said Monday that Russian troops had not made great strides over the past day. Russia’s Defense Ministry says its forces have advanced.

The fighting, now in its third week, continued to exact a human toll. A pregnant woman and her baby died after Russia bombed the maternity hospital where she was meant to give birth. Associated Press images of the woman being rushed to an ambulance on a stretcher were circulated around the world and encapsulated the horror of attacks on humanity’s most innocent.

The war has forced nearly 2.7 million people to flee Ukraine. Thousands of civilians and soldiers have been killed.

WHAT IS THE STATE OF THE FIGHTING?

The official also said a town councilor for Brovary, east of Kyiv, had been killed in fighting there and shells fell on the towns of Irpin, Bucha and Hostomel, which have seen some of the worst conflict during Russia’s stalled attempt to take the capital.

Two people were killed when artillery hit a nine-story residential building in a northern district of the city early Monday morning, destroying apartments on several floors and igniting a fire.

Air raid alerts sounded in cities and towns all around the country overnight, from near the Russian border in the east to the Carpathian Mountains in the west.

The Russian Defense Ministry said Monday its forces had advanced 11 kilometers (7 miles) over the past 24 hours. A ministry spokesman did not comment in a video statement on humanitarian corridors or the crisis in the desperate, strategically important city of Mariupol.

On Sunday, Russia expanded its strikes close to the Polish border, where its missiles pounded a military base in western Ukraine, killing 35 people. The facility served as a critical hub for cooperation between Ukraine and the NATO countries supporting its defense. The attack raised the possibility that the alliance could be drawn into the fight.

WHAT IS HAPPENING TO CIVILIANS?

Civilians continue to pay a price for the war in Ukraine. The Associated Press has learned that a pregnant woman and her baby died after Russian forces bombed a maternity hospital in Mariupol.

In video and photos shot Wednesday by AP journalists after the attack on the hospital, the woman was seen stroking her bloodied lower abdomen as rescuers rushed her through the rubble in the besieged city of Mariupol, her blanched face mirroring her shock at what had just happened. It was among the most brutal moments so far in Russia’s war in Ukraine.

The AP team tracked down the victims in the hospital where they had been transferred, on the outskirts of Mariupol.

Surgeon Timur Marin said the baby showed no signs of life after a caesarean section and attempts to resuscitate the mother were unsuccessful.

On Sunday, an American journalist was killed and another injured when their vehicle came under fire from Russian forces outside Kyiv.

The U.N. has recorded at least 596 civilian deaths, though it believes the true toll is much higher, and Ukraine’s Prosecutor General’s office said that at least 85 children are among them. More than 2.6 million people have fled Ukraine since the start of the conflict.

HOW ARE TALKS PROCEEDING?

A fourth round of talks is expected Monday between Ukrainian and Russian officials via video conference to discuss getting aid to cities and towns under fire, among other issues, Ukrainian presidential aide Mykhailo Podolyak said.

The talks will involve the same higher-level officials who met earlier in Belarus. Previous talks have not led to major breakthroughs or a solution for getting aid or evacuation convoys to Mariupol.

Ukrainian President Volodymyr Zelenskyy has called on Russian President Vladimir Putin to meet with him directly, a request that has gone unanswered by the Kremlin.