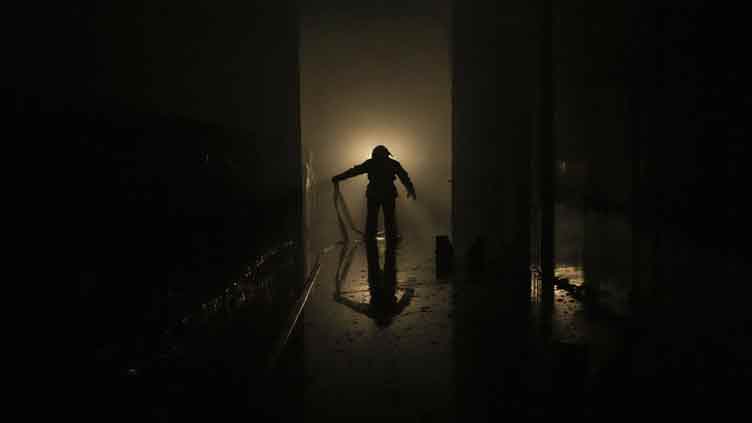 LVIV (AP) — Russia’s military forces kept up their punishing campaign to capture Ukraine’s capital with fighting and artillery fire in Kyiv’s suburbs Monday after an airstrike on a military base near the Polish border brought the war dangerously close to NATO’s doorstep.

A new round of talks between Russian and Ukrainian officials raised hopes that progress would be made in evacuating civilians from besieged Ukrainian cities and getting emergency supplies to areas without enough food, water and medicine.

Air raid alerts sounded in cities and towns all around the country overnight, from near the Russian border in the east to the Carpathian Mountains in the west, as fighting continued on the outskirts of Kyiv. Ukrainian officials said Russian forces shelled several suburbs of the capital, a major political and strategic target for an invasion in its 19th day.

Ukrainian authorities said two people died and seven were injured after Russian forces struck an airplane factory in Kyiv, sparking a large fire. The Antonov factory is Ukraine’s largest aircraft manufacturing plant and is best known for producing many of the world’s biggest cargo planes.

Russian artillery fire also hit a nine-story apartment building in a northern district of the city, killing two more people, authorities said. Firefighters worked to rescue survivors, painstakingly carrying an injured woman on a stretcher away from the blackened and still smoking building.

A town councilor for Brovary, east of Kyiv, was killed in fighting there, officials said. Shells also fell on the Kyiv suburbs of Irpin, Bucha and Hostomel, which have seen some of the worst fighting in Russia’s stalled attempt to take the capital, regional administration chief Oleksiy Kuleba said on Ukrainian television.

The surrounded southern city of Mariupol, where the war has produced some of the greatest human suffering, remained cut off despite earlier talks on creating aid or evacuation convoys.

A pregnant woman who became a symbol of Ukraine’s suffering when she was photographed being carried from a bombed maternity hospital in Mariupol has died along with her baby, the Associated Press has learned. Images of the woman being rushed to an ambulance on a stretcher had circled the world, epitomizing the horror of an attack on humanity’s most innocent.

Ukraine announced plans for new humanitarian aid and evacuation corridors on Monday, although ongoing shelling caused similar efforts to fail in the last week.
A fourth round of high-level discussions between Ukrainian and Russian officials was set for Monday, the first negotiations in a week, Ukrainian presidential aide Mykhailo Podolyak said. The talks were to take place by video conference. The previous rounds were held face-to-face in Belarus.

Monday’s meeting will be a “hard discussion,” Podolyak wrote on Twitter. “Although Russia realizes the nonsense of its aggressive actions, it still has a delusion that 19 days of violence against (Ukrainian) peaceful cities is the right strategy.”

The hope for a breakthrough came the day after Russian missiles pounded a military training base in western Ukraine that previously served as a crucial hub for cooperation between Ukraine and NATO.

The attack killed 35 people, Ukrainian officials said, and the base’s proximity to the borders of Poland and other NATO members raised concerns that the Western military alliance could be drawn into the the largest land conflict in Europe since World War II.

Speaking Sunday night, Ukrainian President Volodymyr Zelenskyy called it a “black day” and again urged NATO leaders to establish a no-fly zone over his country, a move the West has rejected for fear of starting a direct confrontation with nuclear-armed Russia.

“If you do not close our sky, it is only a matter of time before Russian missiles fall on your territory. NATO territory. On the homes of citizens of NATO countries,” Zelenskyy said, urging Russian President Vladimir Putin to meet with him directly, a request that has gone unanswered by the Kremlin.

The president’s office reported Monday that airstrikes hit residential buildings near the important southern city of Mykolaiv, as well as in the eastern city of Kharkiv, and knocked out a television tower in the Rivne region in the northwest. Explosions rang out overnight around the Russian-occupied Black Sea port of Kherson.

Three airstrikes hit the northern city of Chernihiv overnight, and most of the town is without heat. Several areas haven’t had electricity in days. Utility workers are trying to restore power but frequently come under shelling.

While Russia’s military is bigger and better equipped than Ukraine’s, Russian troops have faced stiffer than expected resistance, bolstered by Western weapons support that has frustrated Russian President Vladimir Putin.

With their advance slowed in several areas, they have bombarded several cities with unrelenting shelling, hitting two dozen medical facilities and creating a series of humanitarian crises.

U.S. President Joe Biden is sending his national security adviser to Rome to meet with a Chinese official over worries that Beijing is amplifying Russian disinformation and may help Mosc ow evade Western economic sanctions.

The U.N. has recorded at least 596 civilian deaths since Russia invaded Ukraine on Feb. 24, though it believes the true toll is much higher. The Ukrainian prosecutor general’s office said the death toll includes at least 85 children are among them. Millions more people have fled their homes, with more than 2.7 million crossing into Poland and other neighboring countries.

Since launching its invasion of Ukraine on Feb. 24, Moscow has waged a multi-pronged attack and encircled several cities. The fight for the southern city of Mariupol is crucial because its capture could help Russia establish a land corridor to Crimea, which it seized from Ukraine in 2014.

The International Committee of the Red Cross said suffering in Mariupol, where missiles struck a maternity hospital Wednesday, was “simply immense” and that hundreds of thousands of people faced extreme shortages of food, water and medicine.

“Dead bodies, of civilians and combatants, remain trapped under the rubble or lying in the open where they fell,” the Red Cross said in a statement. “Life-changing injuries and chronic, debilitating conditions cannot be treated.”

Russia also expanded its assault on Sunday to western Ukraine, striking the International Center for Peacekeeping and Security near Yavoriv, a military base which has long been used to train Ukrainian soldiers, often with instructors from the United States and other NATO members. More than 30 Russian cruise missiles targeted the site. In addition to the 35 deaths, 134 people were wounded in the attack, the Ukrainian Defense Ministry said.

The base is less than 25 kilometers (15 miles) from the Polish border and has hosted NATO training drills, making it a potent symbol of Russia’s longstanding fears that the expansion of the 30-member Western military alliance to include former Soviet states threatens its security — something NATO denies.

NATO said Sunday that it currently does not have any personnel in Ukraine, though the United States has increased the number of U.S. troops deployed to NATO member Poland. White House national security adviser Jake Sullivan said the West would respond if Russia’s strikes travel outside Ukraine and hit any NATO members, even accidentally.

Ina Padi, a 40-year-old Ukrainian who crossed the border with her family, was taking shelter at a fire station in Wielkie Oczy, Poland, when she was awakened by blasts Sunday morning from across the border that shook her windows.

“I understood in that moment, even if we are free of it, (the war) is still coming after us,” she said.