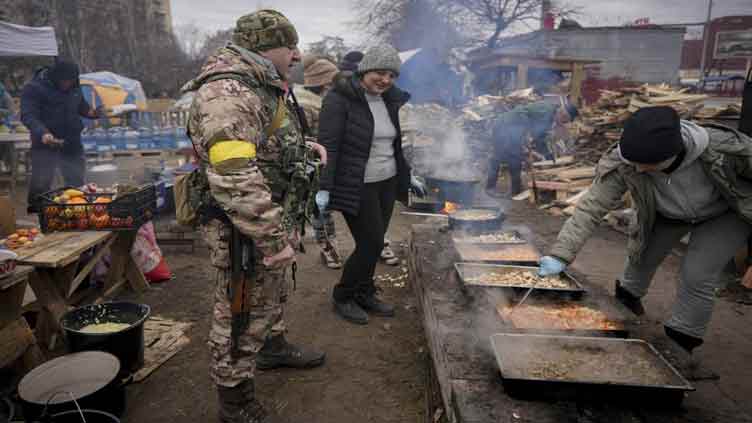 KYIV (AP) — The field kitchen at a makeshift camp in Ukraine’s capital was a hive of activity Monday, giving volunteers a way to contribute to the war effort -- and providing a much-needed distraction from the harrowing news about Russia’s escalating invasion.

A woman identified only as Oksana, whose husband is fighting in the Ukrainian army, said the kitchen duty gives her a way to avoid the latest developments.

“I got information that people need help in the kitchen,” she said from the tent village that had sprung up between a multi-story building and a barrier made of stacked tires and sandbags. “I came and asked, and they said: ‘Yes, we need hands.’ That’s it, and we are not sitting and reading terrifying messages on news channels.”

Another volunteer at the kitchen, Oleksiy Shevchenko, said: “We are cooking soups, porridge for our military, for civilians and for everyone who needs our help, including hospitals.”

Volunteers chopped red peppers and boiled potatoes at the kitchen’s various stations as the humanitarian crisis in Ukraine deepened, and as Russian forces intensified their shelling.

Food, water, heat and medicine grew increasingly scarce, in what Ukraine condemned as a medieval-style siege by Moscow to batter it into submission.

A third round of talks between the two sides ended with a top Ukrainian official saying there had been minor, unspecified progress toward establishing safe corridors that would allow civilians to escape the fighting. Russia’s chief negotiator said he expects those corridors to start operating Tuesday.

Blue-and-yellow Ukrainian flags flew above some of the field kitchen’s tents. Stacks of wood crates and piles of firewood made for walls within the camp. Boiling vegetable soup sent steam into the cold air; wood fire crackled.

Men in camouflage uniforms inspected canned food with messages scrawled on them in black marker.
“Thank you, darlings! We pray for you. God with us!” said one can.