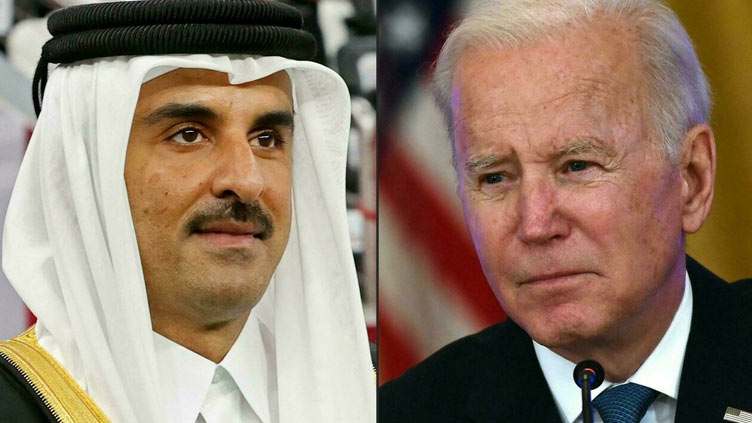 WASHINGTON (AFP) - US President Joe Biden will build on attempts to ensure energy back-up for European allies when he hosts Qatar’s emir Monday in a White House meeting overshadowed by fears that Russia could cut exports over the Ukraine crisis.

Sheikh Tamim bin Hamad al-Thani will be the first Gulf state leader to visit Biden since he became president just over a year ago and the Oval Office talks will cement the tiny country’s status as a major international player.

In addition to meeting Biden, the sheikh will meet with Defense Secretary Lloyd Austin, Secretary of State Antony Blinken, members of Congress and other officials, the White House said.

The most urgent agenda item is a scramble by the United States and the EU to ensure that European nations, already hit by soaring energy prices, can weather disruption in Russian exports if Moscow decides to cut supplies.

Western capitals are threatening unprecedented economic sanctions if Russia attacks Ukraine, where it has placed more than 100,000 combat troops on the border.

However there are fears that the oil- and gas-producing giant could retaliate against the European Union, which imports 40 percent of its natural gas from Russia.

Announcing the visit, Press Secretary Jen Psaki said the emir and Biden would be discussing "the stability of global energy supplies."

Qatar is one of the world’s biggest liquid natural gas exporters, along with the United States and Australia, and there are hopes in Washington and Europe that Doha can temporarily redirect exports destined for Asian markets.

However, Qatar has little to no extra capacity in its LNG and there are limitations to how much supply can be diverted from existing contracts.

Speaking just ahead of the visit, a senior US official seemed to downplay the focus on how much to expect from Qatar in the energy reshuffle, saying only "we’re consulting with all the leading gas suppliers around the world."

"I’m not going to be able to give you anything further on LNG," the official told reporters Sunday, speaking on condition of anonymity. "It will figure in the mix, but I can’t give you any details."

Qatar plays a key role in the region for the United States as host for the Pentagon’s Central Command.

During the Afghanistan evacuation last year, US forces sent about 60,000 Afghans and Americans transiting through the Qatar air base.

Doha, serving as Washington’s diplomatic contact with the Taliban, will be pivotal to any future contact with Afghanistan, as well as playing a role in efforts to resurrect the Iran nuclear deal.

Qatar Airways, meanwhile, is keen to build its cargo fleet and has expressed interest in a deal with Boeing to become the launch customer for the US aerospace giant’s new 777X freighter.