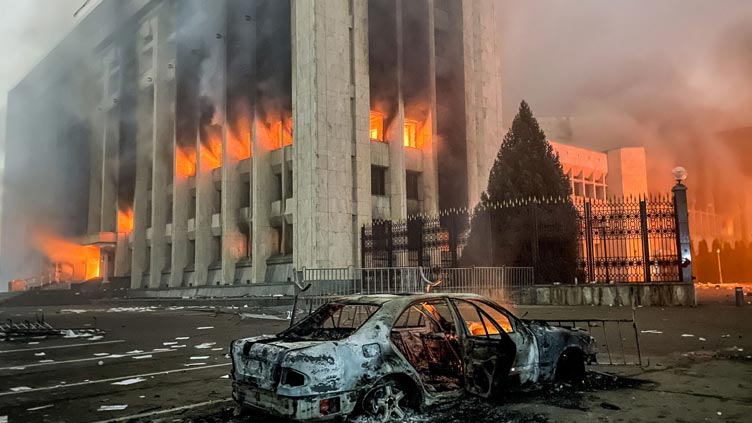 It is unclear why so many civilians died, and who the "foreign terrorists" the government blames.

ALMATY (AFP) - As the dust settles on lethal clashes in Kazakhstan that prompted authorities to call in Russian-led troops, questions are mounting over the authoritarian government’s handling of the unprecedented crisis.

While President Kassym-Jomart Tokayev has pinned the blame on bandits and foreign militants, many ordinary people question the official storyline.

But many stress that a number of issues remain unexplained.

It is unclear why so many civilians died, and who the "foreign terrorists" the government blames for the violence are.

And where is Tokayev’s mentor and predecessor, 81-year-old Nursultan Nazarbayev, who has not been heard from since last year?

Dauren Bitkembayev, 30, who lost his elderly parents in the unrest, told AFP he needs answers.

He and others want to know why gun attacks on civilian cars in the country’s largest city occurred even after the military had appeared to restore order.

A video shared on social media shows a car engulfed in flames close to barriers put up by the military. Inside the vehicle were a retired postal service worker and a former teacher, Bitkembayev’s late parents.

"It looks like military shot (the car) up... and we thought (violence) was over," the eyewitness, who filmed the burning car, can be heard saying.

"Everyone is saying it was the army (who fired). I don’t understand," said Bitkembayev, who works in a pawn shop ransacked by looters during the upheaval.

"Were they blind? They could see it was a grandfather and a grandmother -- what kind of looters or terrorists could they be?" Bitkembayev asked.

Some doubt the authorities will ever tell the whole truth.

"With internet shut down, some turned out to be too susceptible to propaganda ready to believe that everyone who has been out on the streets is a terrorist and villain," he told AFP.

"Others understand that a lot of civilians died, there are a lot of innocent people in prisons, and instances of torture have been reported."

The government has offered detailed accounts of how members of law enforcement died but provided little evidence proving the involvement of "foreign terrorists".

Rights activists have been putting together a list of hundreds of people detained, killed or missing.

It has taken authorities days to release an official death toll.

Kazakhstan had initially acknowledged fewer than 50 fatalities. A higher mortality count of 164 had been quickly retracted last week. On Saturday, officials said 225 had died.

Over 12,000 people have been detained since the unrest erupted in early January, including journalists and rights activists.

Internet has been returned to the vast country after a blackout that lasted close to a week in Almaty, but establishing facts on the ground remains difficult.

Outside morgues in Almaty, relatives of people suspected to have been killed stood on the street, waiting for information and a chance to bury their loved ones.

Three men from the eastern city of Semey told AFP security service representatives had warned them not to speak to journalists.

In a car parked behind an AFP car, two bulky men appeared to be monitoring the scene.

Days after the violence peaked in early January, pro-government television showed a man from neighbouring Kyrgyzstan with cuts and bruises on his face, appearing to confess to accepting money to participate in unrest.

But he was quickly identified by the public as a well-known jazz musician.

Pianist Vikram Ruzakhunov was eventually allowed to return home. In a guarded media appearance, he attributed the bruises on his face to "a harsh arrest".

Russia has defended the official version of events.

Kremlin spokesman Dmitry Peskov has called Ruzakhunov’s arrest "an isolated case that does not give rise to doubts about the seriousness of the terrorist threat".

But many commentators saw an example of long-standing law enforcement excesses that have intensified during the state of emergency.

The police state championed by pro-government media is "returning us to a past that we are trying to flee from," said Alisher Yelikbayev, a businessman and popular blogger.

The government’s explanation for the unrest is muddied by a high-stakes power struggle.

Authorities later announced the arrests on coup-plotting charges of a former national security chief close to Nazarbayev and two of his deputies.

This week, Tokayev -- who was handpicked by Nazarbayev to take over the presidency in 2019 -- criticised his mentor for failing to share the country’s vast wealth with ordinary people, a development unimaginable just weeks ago.

"It has become clear that power in Kazakhstan is not monolithic," said commentator Moldabekov.