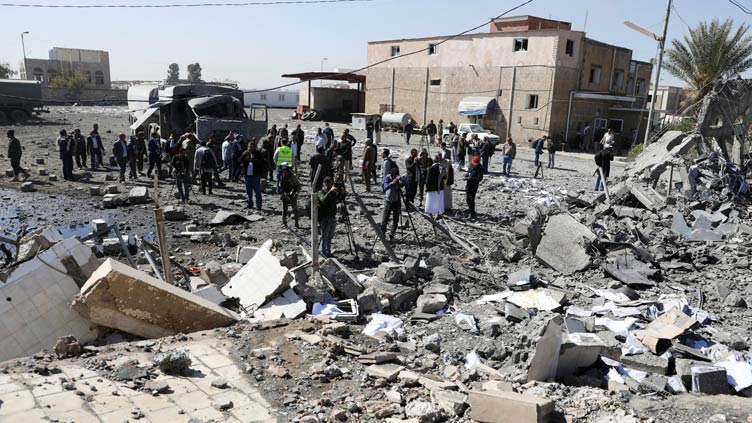 More than 80 percent of the population of around 30 million require humanitarian assistance.

SANAA (AFP) - UN aid flights into Yemen s rebel-held capital Sanaa have been halted by air strikes carried out by the Saudi-led coalition which supports the government, an airport official said Tuesday.

Due to coalition air strikes targeting the Huthi rebels, "the airport is no longer able to receive aircraft operated by the United Nations or international humanitarian organisations", the official told AFP.

Flights into Sanaa airport have been largely halted by a Saudi-led blockade since August 2016, but there have been exemptions for aid flights that are a key lifeline for the population.

The airport official, who asked not to be identified, called on the United Nations to secure a halt to the raids so that the airport could resume operations.

On Monday evening, the coalition said it had carried out "a limited number of precision strikes on legitimate military targets in Sanaa international airport".

"The operation was mounted in response to the threat and use of airport infrastructure to carry out cross-border attacks," it said in a statement carried by the official Saudi Press Agency.

Its aircraft hit six targets in the airport, including sites used to "control attacks by drones loaded with explosives" or to "train terrorist elements" for such operations, the statement said.

- Keep airport  out of crossfire  -

The coalition has insisted that its strikes were "in accordance with international humanitarian law" and should have no impact on the airport s operational capacity.

A metal hangar and cement structures near an air traffic control tower were also destroyed, an AFP correspondent reported.

"A UN team is on the ground at Sanaa airport to verify the extent of any damage," a World Food Programme spokesperson told AFP.

The Norwegian Refugee Council urged both sides to work with the UN to reopen the airport for humanitarian and commercial flights.

"Aid delivery to the airport is now at a standstill. We urge both the authorities in Sanaa and the Saudi-led coalition to keep Sanaa airport out of the crossfire and to ensure that it can function again for medical and commercial flights," NRC country director Erin Hutchinson said in a statement.

The coalition said Tuesday that Saudi airports were prepared to receive Yemen-bound humanitarian flights and to deliver aid through "access points" under UN supervision, according to statement carried by state-owned Al-Ekhbariya television.

It claimed the Huthis had halted UN aid flights into Sanaa airport on December 19.

They have intensified their strikes on the kingdom in recent months.

And in October, Saudi state media reported that 10 people were hurt in a drone attack on a civilian airport in the Saudi Red Sea city of Jeddah.

Saudi Arabia and its allies intervened in the Yemeni civil war in 2015, shortly after the rebels seized the capital Sanaa.

The conflict has led to what the United Nations has called the world s worst humanitarian crisis. Tens of thousands of people -- most of them civilians -- have been killed in the war.

More than 80 percent of the population of around 30 million require humanitarian assistance.

A UN Development Programme report last month said the war will have claimed 377,000 lives by the end of the year through both direct and indirect impacts.

Nearly 60 percent of deaths will have been caused by consequences such as lack of safe water, hunger and disease, it said, suggesting that fighting will have directly killed over 150,000 people.

While the UN and Washington are pushing for an end to the war, the Huthis have demanded an end to the coalition air blockade of Sanaa airport before any ceasefire or negotiations.