UK says hundreds of its nationals left in Afghanistan 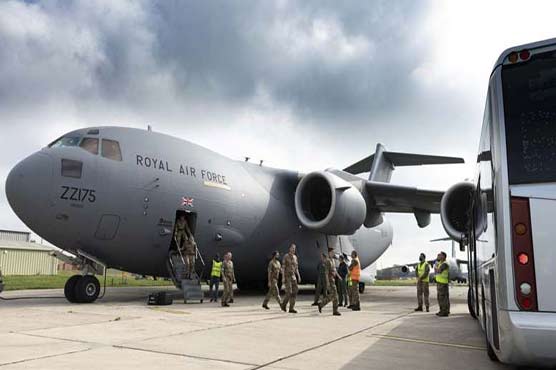 UK says hundreds of its nationals left in Afghanistan

Britain concluded its airlifts from Kabul airport on Saturday.

LONDON (AFP) - The number of UK nationals left behind in Afghanistan is in the "low hundreds", British Foreign Secretary Dominic Raab said on Tuesday, after the two-decade Western military presence there ended.

Raab added he was unable to give an exact figure for how many British nationals and others potentially eligible to leave Afghanistan had not been evacuated following the Taliban’s takeover.

"It’s very difficult to give you a firm figure," he told BBC radio, hours after the last US troops flew out of country.

Britain concluded its airlifts from Kabul airport on Saturday.

"I can tell you that for UK nationals we’ve secured since April over 5,000, and we’re in the low hundreds (remaining)," Raab said.

Prime Minister Boris Johnson hailed Britain’s evacuation efforts as they ended over the weekend, noting it had airlifted over 15,000 people in the last two weeks.

But his government has faced scathing criticism over its handling of the crisis, prompted by the decision of its ally the United States to end its 20-year Afghan presence.

That led the Taliban to recapture power earlier this month -- and the West scrambling to exit the country amid chaotic scenes.

Critics have argued the Taliban’s return and Western forces’ hasty withdrawal leaves Afghanistan open to becoming a sanctuary for terrorism again, 20 years on from the 9/11 attacks.

Fears are growing in particular that the Islamic State’s Afghan offshoot, which has claimed responsibility for last week’s suicide attack that left scores of Afghans and 13 US troops dead, could strengthen there.

"We’ve got to be able to play a global role in the global coalition to defeat Daesh, whether it’s strike, or whether it’s moving troops or equipment into a particular country, at scale and at speed," he told the Daily Telegraph.

"If there’s an opportunity for us to contribute I am in no doubt that we will be ready to," Wigston added.

"Afghanistan is probably one of the most inaccessible parts of the world, and we’re able to operate there."