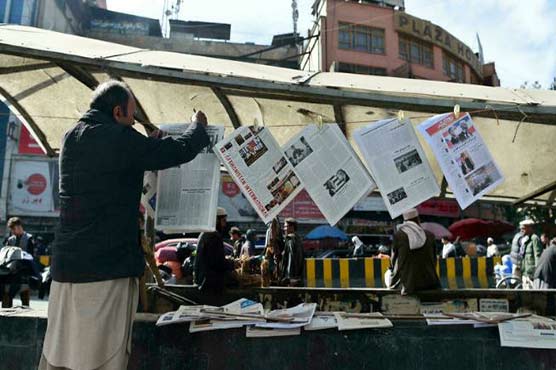 KABUL (AFP) - Scores of journalists are among the tens of thousands of people trying to flee Afghanistan following the Taliban takeover, fearful of violent reprisals from the militants.

Despite their assurances, the group’s return to power is seen as a serious blow to Afghan media, which saw explosive growth after the first Taliban regime was toppled in 2001.

What was the Afghan media like under the Taliban?

There was no Afghan media to speak of when the Taliban ruled Afghanistan from 1996 to 2001.

They banned television, movies and most other forms of entertainment for being immoral. Some electronic products were outlawed as un-Islamic too.

People caught watching TV faced punishment, including having their set smashed. Ownership of a video player could lead to a public lashing.

For a while, magnetic ribbon tape from destroyed cassettes could be seen fluttering from trees in some parts of the capital Kabul.

There was only one radio station, Voice of Sharia, that broadcast propaganda and Islamic programming.

What happened after they were toppled?

Under the US-backed setup formed after the fall of the Taliban in 2001, there was massive growth in the Afghan media sector, including private TV and radio networks.

And it was not just news -- movies, soap operas, talent shows and music videos were also produced.

Internet and social media access, especially through smartphones, has proliferated in recent years too.

Most dramatically, the opening up of Afghan media allowed space and opportunities for the country’s women, who were shut out from public life, education and workplaces by the Taliban.

Hundreds of women around the country worked on and behind the screen as journalists, producers, hosts and performers.

What have the Taliban promised now?

After the fall of Kabul, Taliban officials in Doha and Afghanistan stressed that the media could continue to operate freely and that journalists would not be harassed or harmed.

One Taliban official even sat down for a TV interview with a woman journalist, as if to press the point.

As with their promises about other issues such as women’s rights and amnesty, however, there appears to be little trust among Afghanistan’s journalists that the militants mean what they say.

In recent weeks, dozens of TV and radio outlets have stopped broadcasting or were seized by the Taliban as the militants rapidly captured territories on their way to Kabul.

And despite the promises made by their top spokesmen, Taliban fighters have been reportedly going door-to-door in recent days searching for opponents -- including journalists.

In the northern province of Jawzjan, local radio station Salam Watandar said Monday that it will be allowed to broadcast content after it has been reviewed by the local Taliban office.

What are Afghan journalists saying?

There is strong basis for the fear and mistrust among Afghan journalists.

Despite the growth of the sector, Afghanistan has been one of the most dangerous countries in the world for reporters, with at least 53 killed since 2001 according to the Committee to Protect Journalists.

Media workers have been targeted with impunity for years by militant groups, a major factor in Afghanistan’s low ranking on press freedom indices.

A high-profile woman journalist at state-run broadcaster RTA said last week that she was told to go home because "the system has been changed".

"Our lives are under threat," said Shabnam Dawran.

Many Afghan journalists are reportedly in hiding or trying to leave the country on evacuation flights from Kabul.

A large number who worked for foreign media have left, but it is a hugely difficult situation for those without foreign sponsorship.

"A massacre of my dreams and aspirations," he tweeted.