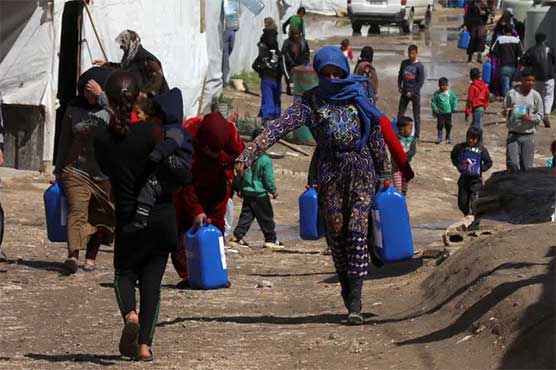 BRUSSELS (Reuters) - The United Nations urged international donors to pledge up to $10 billion on Tuesday to help Syrians fleeing a decade of civil war in the midst of the COVID-19 pandemic, saying that the need for humanitarian support has never been so great.

In the fifth annual conference to keep Syrians from starvation, the event hosted by the European Union is seeking $4.2 billion for people inside Syria and $5.8 billion for refugees and their hosts in the Middle East.

Some 24 million people need basic aid, a rise of 4 million over the past year and the highest number yet since a crackdown on pro-democracy protesters by Syrian President Bashar al-Assad in 2011 led to civil war.

"I call on you to help us address rising needs and to step up your financial and humanitarian commitments," United Nations Secretary-General Antonio Guterres said in a video message.

"Syria s economy has been ravaged and now the impacts of COVID-19 have made things worse. Almost half of all families lost their source of income. Nine in 10 Syrians is living in poverty," he said.

Germany pledged 1.738 billion euros ($2.04 billion), its amount largest in four years. The EU s support, which comes from its common budget and is separate from its members, was steady at 560 million euros. Other pledges came in throughout the day, including $100 million from Qatar and almost $600 million from the United States.

The total was expected to be announced later on Tuesday. U.S. Secretary of State Antony Blinken late on Monday called for Syria s borders to be kept open to allow unhindered access and the free flow of aid, a call echoed by the EU s top diplomat Josep Borrell.

"It s vital that assistance can reach those in need ... It s of vital importance for humanitarian help being able to be brought to these people," Borrell said.

Fighting between Syrian army forces and rebels has subsided since a deal a year ago ended a Russian-led bombing campaign that had displaced over a million people, but Russian air strikes, along with Iranian and Syrian-backed militaries, continue to attack rebel outposts.

International Committee of the Red Cross head Peter Maurer urged world powers to reach a peace deal or face many more annual donor conferences for Syria. "The ultimate responsibility lies with parties to the conflict," he said.