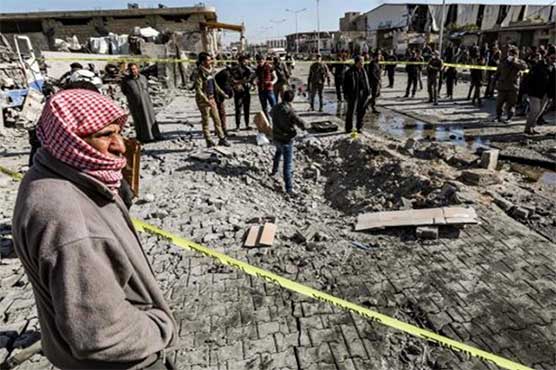 BEIRUT (AFP) - Twenty-nine people were killed Tuesday by explosives in three separate incidents in parts of north Syria along the border with Turkey, a war monitor said.

There was no immediate link between the two car bombings near Al-Bab and in Afrin that killed a total of eight people, or the incident that claimed 21 lives in a minefield.

Syria s civil war has evolved into a complex conflict involving world powers and jihadists since it started with the repression of anti-government protests in 2011.

In the north of the country, Turkey and its Syrian proxies control several pockets of territory following three military incursions since 2016 against the Islamic State group and Kurdish fighters.

In the first incident, explosives planted in the car of a police chief on the outskirts of Al-Bab detonated and killed him, two other policemen and two civilians, said the Syrian Observatory for Human Rights.

An AFP photographer saw the charred, mangled remains of a vehicle at the site of the explosion.

In the town of Afrin, a car bomb went off near a bakery, killing three people and wounding 16 others.

There was no immediate claim of responsibility for either blast.

There have been a string of attacks in Al-Bab since its capture by Turkish troops from IS in 2017.

Several have also hit Afrin, which Turkey and its Syrian proxies seized from Kurdish fighters in 2018.

Elsewhere in north Syria, a group of pro-Turkey fighters were killed overnight near the town of Ain Issa when they walked into a minefield laid by Kurdish-led forces, the monitor said.

They were among around 30 Turkey-backed combatants who had been trying to sneak into Muallaq village after sending in drones to bombard it, said the Observatory.

But they became ensnared in a minefield laid by the Kurdish-led Syrian Democratic Forces (SDF), killing 21 and wounding the rest.

"Car-bombs remain a deadly scourge in Syria," he tweeted.

The Observatory said the Al-Bab bomb was "likely" planted by an IS sleeper cell.

Al-Bab was one of the western-most strongholds of the territorial "caliphate" that IS in 2014 declared in Syria and neighbouring Iraq.

The US-backed SDF seized the last scrap of that territorial proto-state from the jihadists in eastern Syria in March last year.

But the jihadist group continues to carry out attacks through a network of sleeper cells operating in some regions it used to control.

Last year, Turkish soldiers and their Syrian proxies seized a 120-kilometre (70-mile) stretch of land from Kurdish fighters on the Syrian side of the border.

Since then, pro-Ankara fighters have been stationed to the north of Ain Issa, and sporadic skirmishes have broken out between them and SDF.