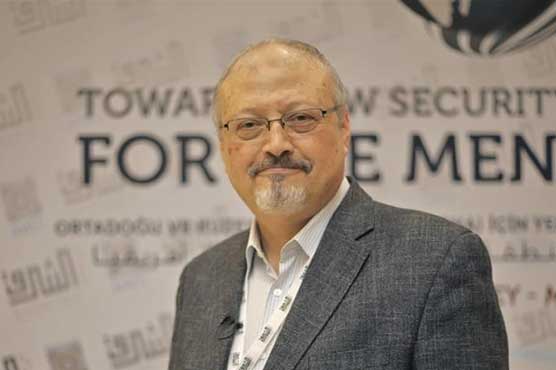 Khashoggi, 59, was an insider-turned-critic who wrote for The Washington Post before he was killed inside the Saudi consulate in Istanbul on October 2, 2018 where he had gone to obtain documents for his wedding to Turkish fiancee Hatice Cengiz.

They were formally charged in March with "instigating the deliberate and monstrous killing, causing torment".

Eighteen other suspects -- including intelligence operative Maher Mutreb who frequently travelled with the crown prince on foreign tours, forensic expert Salah al-Tubaigy and Fahad al-Balawi, a member of the Saudi royal guard -- were charged with "deliberately and monstrously killing, causing torment".

The prosecutor has already issued arrest warrants for the suspects who are not in Turkey, so they face life terms without the likelihood of ever serving any conviction.

Cengiz, who is a complainant in the case, was attending the trial alongside the UN special rapporteur on extrajudicial, summary or arbitrary executions, Agnes Callamard.

Yasin Aktay, a close friend of Khashoggi and advisor to Turkish President Recep Tayyip Erdogan s ruling party, was also in the courtroom.

Erdogan has said the order to murder Khashoggi came from "the highest levels" of the Saudi government but has never directly blamed Prince Mohammed.

"We have confidence in the Turkish judiciary. Now, the judicial process has started. We will continue our search for justice, here in Turkey and everywhere else, using every means available," Cengiz told journalists after the hearing ended.

It was Cengiz who had notified authorities of the disappearance of her fiance after she had waited for several hours outside the Saudi consulate.

During the Istanbul prosecutor s investigation, the suspects  phone records, their presence at the consulate confirmed by CCTV images, as well as Khashoggi s laptop, two phones and an iPad were analysed.

Khashoggi was killed and dismembered in the Saudi consulate in a case that tarnished the reputation of the crown prince despite his strenuous denial of any involvement.

Saudi Arabia describes the murder as a "rogue" operation but both the CIA and Callamard have directly linked the crown prince, the de facto ruler and heir to the Saudi throne, to the killing.

During the hearing on Friday, Cengiz and a Turkish employee of the Saudi consul s residence in Istanbul testified.

According to Callamard, the employee said he had been called to the residence on the day of the murder to light a large oven in the garden "where four or five  guests " were already present.

"When he returned three days later, he discovered the marble stone around the furnace had been bleached," she added. The next hearing in the case will be on November 24.

A closed-door trial of 11 suspects in Saudi Arabia ended in December with five unnamed people sentenced to death.

"The Saudi process was anything but justice. It was a travesty of justice," Callamard said after the hearing in Turkey.

The Turkish case "sends a very strong message to dictators around the world that they cannot get away with killing a journalist," she added.

The sons of Khashoggi said they forgave his killers in May this year, a moved expected to allow the government to grant clemency for the five convicts on death row.

Relations between Ankara and Riyadh are rocky, having worsened significantly after Khashoggi s murder.

The two countries are also on opposing sides in the Libyan war, where Ankara has recently helped turn the tide in favour of the UN-recognised government in Tripoli.