Amid ruins of a Syrian town, Ramadan meal reunites a community 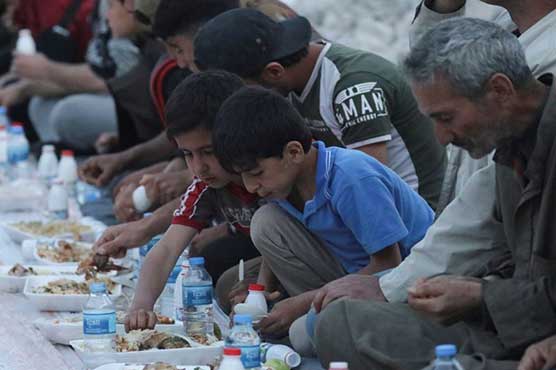 Amid ruins of a Syrian town, Ramadan meal reunites a community

Fears that new coronavirus would spread quickly through camps for the displaced at Turkish border.

ATAREB (Reuters) - Amid mounds of rubble and the ruins of buildings destroyed during nearly a decade of war, a Ramadan iftar meal has reunited a community in northwestern Syria.

Dozens of men and children sat out on a long line of blankets on the ground in the town of Atareb for the iftar, when Muslims break their daily fast at sundown during the Islamic holy month of Ramadan.

Many have returned to the town from camps for the displaced since a March ceasefire halted the most recent government offensive against the rebel-held territory.

"This is the first time that we ve got together since the enormous destruction that happened in the district," said Mohamad Jabar, 30, who attended the iftar on Thursday with his children.

"We returned recently to our homes. Even if they are destroyed or half destroyed, they are better than the camps and the crowding."

Fears that the new coronavirus would spread quickly through camps for the displaced at the Turkish border have encouraged some to return to their homes near the frontline.

So far, no cases of the virus have been confirmed in the rebel-held northwest, where just a few hundred tests have been carried out on a population of some 4 million people.

The site of the iftar was held was cleaned and sanitised by Civil Defence workers beforehand, said Abdel Malak al-Sheikh, 37, a member of the charity that organised the meal.

Organisers encouraged the attendees to stay apart to respect social distancing rules. But most ended up sitting close together as the ate.

"From amid the destruction, we are trying to deliver a message to the whole world that we are steadfast. From the destruction that Bashar al-Assad caused, life and hope will spring," Sheikh said.

Northwestern Syria is the last major piece of territory held by rebels fighting President Assad. Backed by his allies Russia and Iran, Assad waged his latest offensive to recover the area earlier this year.