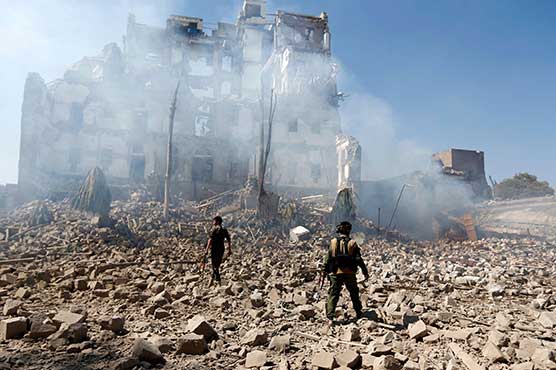 SANAA (AFP) - Impoverished Yemen is mired in a devastating conflict between Iran-backed rebels and government forces that intensified after Saudi Arabia spearheaded a military intervention five years ago.

Here is a broad overview:

Backed by Shiite Iran, the rebels ally themselves with military units loyal to ex-president Ali Abdullah Saleh, who was forced to quit after a 2011 uprising.

As well as the capital, they seize swathes of territory, including the Red Sea port of Hodeida, a crucial entry point for imports and humanitarian aid.

A coalition led by Sunni-ruled Saudi Arabia, the bitter regional rival of Iran, enters the conflict on March 26, 2015 with air strikes on the rebels.

Washington says it is contributing logistics and intelligence. As the rebels advance on Aden, Hadi flees, taking refuge in Saudi Arabia.

The coalition s intervention helps pro-government forces to secure the southern port city and in October they announce they have retaken control of the Bab al-Mandab strait, a key waterway for international shipping.

In June 2018, government fighters, backed by Saudi and Emirati ground forces, launch an offensive to retake the port city of Hodeida.

UN-brokered talks between the warring parties open in December, yielding a series of breakthroughs including a ceasefire in Hodeida where combat largely ceases.

The anti-Huthi camp is itself divided, with fighting breaking out repeatedly between southern separatists and unionist forces loyal to Hadi s government.

In January 2018, the separatists occupy the presidential palace in Aden, before Saudi-Emirati forces intervene.

South Yemen was an independent state until it united with the north in 1990, and separatists remain powerful.

In August 2019, clashes in Aden pit separatists from the UAE-trained Security Belt force against unionist troops backed by Riyadh.

In November, a power-sharing accord is signed between the two parties, but is never applied.

In September 2019, twin attacks on Saudi oil installations, claimed by the Huthis but widely blamed on Iran, knock out half of the kingdom s production.

Saudi Arabia has been repeatedly targeted with cross-border missile and drone attacks by the rebels.

After a relative lull in violence, fighting flares in mid-January to the east of the rebel-held capital.

On January 18, a missile strike on a loyalist military camp blamed on the Huthis kills 116 people and injures dozens.

The victory puts them on the road to Marib, a key city held by government forces 170 kilometres (105 miles) east of Sanaa.

On March 28, Saudi air defences intercept Huthi missiles over Riyadh and the border city of Jizan.

More than 24 million Yemenis, or more than two thirds of the population, need aid, according to the United Nations which describes the conflict as "the world s worst humanitarian crisis".

Both sides stand accused of committing violations that could amount to war crimes.

From April 8, the coalition declares a two-week ceasefire in Yemen, according to a senior Saudi official, who cites the need to prepare "the ground to fight COVID-19" in the country.

The announcement draws a cautious welcome from the Unuited Nations and relief agencies but there is no immediate reaction from the rebels.