Iran, US heat up war of words on Iraq despite virus pandemic 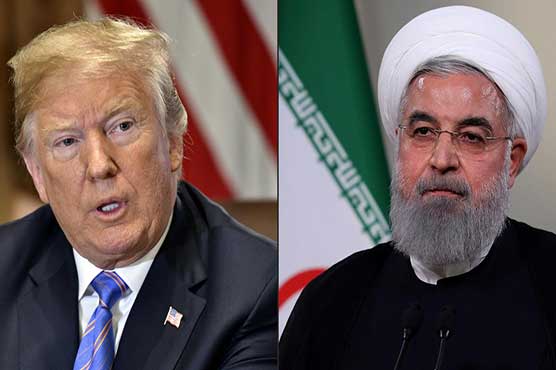 Iran, US heat up war of words on Iraq despite virus pandemic

Both countries have been hit hard by the COVID-19 pandemic

TEHRAN (AFP) - Iran said Thursday it "only acts in self-defence" after President Donald Trump warned it against attacks on US troops in Iraq, as a new war of words heated up despite the coronavirus pandemic.

Tensions between the arch-foes flared in Iraq where the United States deployed Patriot air defence missiles prompting neighbouring Iran to warn of consequences and demand a US withdrawal.

Both countries have been hit hard by the COVID-19 pandemic, which has claimed more than 5,000 lives in the United States and more than 3,000 in Iran.

"Unlike the US -- which surreptitiously lies, cheats & assassinates -- Iran only acts in self-defence," Foreign Minister Mohammad Javad Zarif tweeted.

"Don t be misled by usual warmongers, AGAIN," he said, addressing US President Donald Trump. "Iran starts no wars but teaches lessons to those who do," he added.

Trump warned Iran on Wednesday that it would pay a "heavy price" in the event of further attacks on US troops.

He tweeted that "upon information and belief, Iran or its proxies are planning a sneak attack on U.S. troops and/or assets in Iraq."

In response, Zarif wrote on Twitter that "Iran has FRIENDS: No one can have MILLIONS of  proxies "

Iran responded angrily to the US Patriot deployment warning that Washington risked leading the Middle East to disaster in the midst of the coronavirus pandemic.

Iran and the US are in a tense battle for influence in Iraq, where Tehran has powerful allies and Washington has close ties to the government.

Bases in Iraq housing US troops and foreign embassies, particularly the American mission, have been targeted in more than two dozen rocket attacks since October that Washington has blamed on Iran-backed armed groups.

Tensions have risen sharply since Trump withdrew from a landmark nuclear agreement in 2018 and reimposed sweeping sanctions.

They escalated in January when the US killed Iran s Major General Qasem Soleimani in a drone strike near Baghdad airport.

Iran retaliated by firing at bases in Iraq housing US troops.

While on high alert for a response, Iranian air defences accidentally shot down a Ukrainian airliner minutes after takeoff from Tehran, killing all 176 people on board.

Iran has repeatedly called on the Trump administration to reverse its sanctions policy, which has been opposed even by US allies, particularly since the COVID-19 pandemic hit.

"This was the best, historic opportunity for the Americans to reverse their wrong path and for once, tell their nation they are not against the Iranian people," President Hassan Rouhani told a cabinet meeting on Wednesday.

Medicines and medical equipment are technically exempt from the US sanctions but purchases are frequently blocked by the unwillingness of banks to process purchases for fear of incurring large penalties in the United States.

European nations have delivered medical goods to Iran in the first transaction under the Instex financing mechanism set up to get round US sanctions, Germany said on Tuesday.

But it is more than a year since Britain, France and Germany announced the creation of Instex and Iran has questioned European governments  commitment to seeing it through in defiance of the Trump administration.