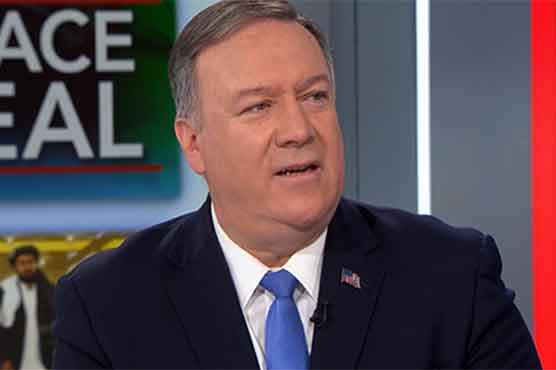 WASHINGTON (Web Desk) – United States Secretary of State Mike Pompeo acknowledged on Sunday that the road ahead in Afghanistan will be rough following the historic peace deal between United States and Taliban.

During an interview, Mike Pompeo said "No one is under any false illusion that this won’t be a difficult conversation, but that conversation for the first time in almost two decades will be among the Afghan people."

Referring to US-Taliban deal, he said, “We’ve built an important base where we can begin to bring American soldiers home, reduce the risk of the loss of life of any American in Afghanistan."

Pompeo, the first U.S. Cabinet official ever to meet with a member of the Taliban, said the group has "an enormous amount of American blood on their hands."

“It’s not about trust," the secretary of state said. "It’s about what happens on the ground."

Pompeo was in Doha, Qatar, on Saturday for the signing of the peace deal, which seeks to end the 18-year conflict in Afghanistan. America’s longest war has claimed the lives of more than 2,400 americans.

The agreement between the U.S. and Taliban calls for a drawdown of forces in Afghanistan from 13,000 to 8,600 in the next 135 days, followed by the withdrawal of all troops within 14 months.

The deal also lays out the details of a prisoner swap, with up to 5,000 Taliban to be released in exchange for 1,000 imprisoned Afghan security forces by March 10.

The Taliban, meanwhile, must not allow its members or members of other groups including al Qaeda to use Afghanistan to threaten the security of the U.S. and its allies. The Taliban and the Afghan are required to begin peace talks March 10 under the terms of the deal.

President Trump said the pact is a vital step toward ending the war in Afghanistan, but US administration officials have also acknowledged its success is contingent on the Taliban fulfilling its obligations.