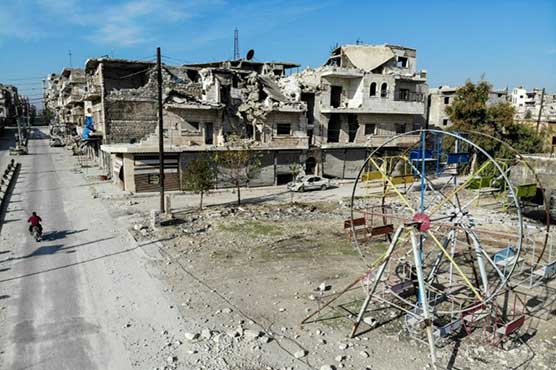 (AFP) – Regime forces have seized dozens of towns and villages in northwest Syria from jihadists following days of violent clashes, fuelling an exodus of civilians, a war monitor said Sunday.

The fresh advances in Idlib came as Russian warplanes continued to pummel the province s south, killing nine civilians who were trying to escape the flashpoint area on Sunday, the Britain-based Syrian Observatory for Human Rights said.

The ground assault by regime loyalists brings them closer to capturing one of the largest urban centres in Syria s last major opposition bastion.

"This push is an attempt to get closer to Maaret al-Numan," Observatory head Rami Abdul Rahman told AFP.

Residents of the southern Idlib town flooded out of the area, fearing further advances, an AFP correspondent there said.

According to the Observatory, more than 30,000 people had fled the flashpoint area in southern Idlib in recent days. More than 40 civilians were reportedly killed in the region in the past week.

Abu Akram, a resident, said rescue workers and local relief groups were struggling to get families out.

"Everybody is working at full capacity but they can t handle such a large number of people," the father of five told AFP after he could not find a vehicle to drive his own family further north.

The jihadist-dominated Idlib region hosts some three million people, including many displaced by years of violence in other parts of Syria.

The Damascus regime has repeatedly vowed to take back the area and bombardment has continued despite a ceasefire announced in August, claiming the lives of more than 290 civilians and hundreds of fighters from both sides.

Heightened regime and Russian bombardment on the Maaret al-Numan region since December 16 has forced tens of thousands of vulnerable people to flee their homes, according to the United Nations.

The UN has called for "immediate de-escalation" and warned of further mass displacement if the violence continues.

"Nowhere is safe. If we stay inside our homes, or if we flee outside, we will die either way," said Abu Akram.

Damascus loyalists have since Thursday been locked in battles with jihadists and allied rebels, seizing a total of 29 towns and villages from their control, according to the Britain-based Observatory.

Four days of fighting has killed 110 jihadists and rebels, as well as 77 regime loyalists, added the monitor, which relies on sources inside Syria for its reports.

Pro-government forces launched a blistering offensive against the region in April, killing around 1,000 civilians and displacing more than 400,000 people from their homes.

Russia and China on Friday vetoed a UN Security Council resolution that would have extended for a year cross-border aid deliveries to four million Syrians, many of them in Idlib.

The move raised fears that UN-funded assistance could stop entering opposition-held parts of Syria from January unless an alternative agreement is reached.

Syria s war has killed over 370,000 people and displaced millions since beginning in 2011 with the brutal repression of anti-government protests.