Top US military official says 500 troops to remain in Syria 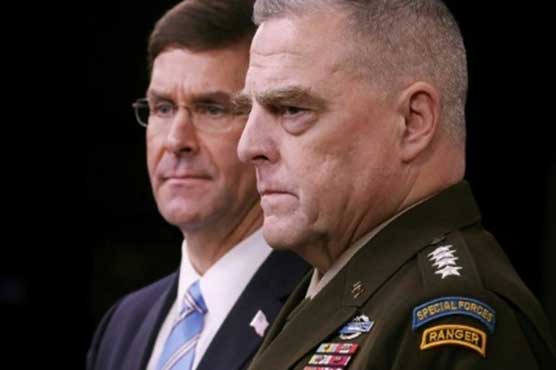 Top US military official says 500 troops to remain in Syria

"There will be less than 1,000, for sure," General Mark Milley, chairman of the Joint Chiefs of Staff, said on ABC s "This Week." "Probably in the 500ish frame, maybe six."

Trump s abrupt announcement last month that he had ordered a full troop withdrawal drew angry rebukes at home and abroad, with critics saying it could allow a resurgence of the Islamic State group while leaving US-allied Kurdish fighters in Syria vulnerable to a Turkish invasion.

The US president later relented in part, saying he would leave some troops in the region to protect valuable oil fields.

Milley, who has commanded troops in Afghanistan and Iraq, told ABC that it was important for US troops to remain in Syria so long as IS has a presence there.

"There are still ISIS fighters in the region," he said, using an alternate term for IS. "Unless pressure is maintained, unless attention is maintained on that group, there s a very real possibility there could be a re-emergence of ISIS."

Asked about the killing Oct. 26 of IS leader Abu Bakr al-Baghdadi by a US special forces unit, Milley said it would have a "significant disruptive effect on the organization." He said the US had "a considerable amount of information on his successor," Abu Ibrahim al-Hashimi al-Quraishi.

"Where opportunities arise," Milley said, "we ll go after him."

Trump has said he wants to wind down US military entanglements abroad where possible, but Milley predicted that American troops, already in Afghanistan for 18 years, would remain there "for several more years."

He was also asked whether he knew Alexander Vindman, the army lieutenant colonel and White House Ukraine expert who has testified about his concerns over a controversial phone call between Trump and Ukrainian President Volodymyr Zelensky.

Milley declined to comment "on a witness to an active investigation" -- the House of Representatives  impeachment inquiry into Trump.