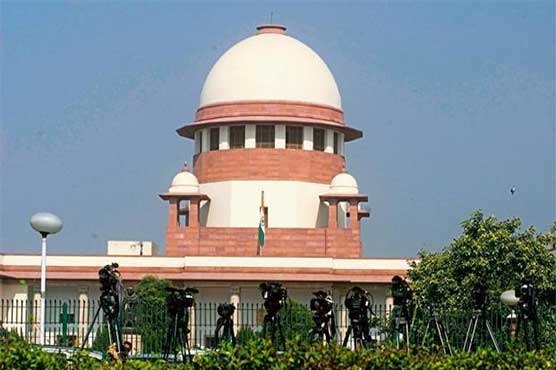 NEW DELHI (Dunya News) – India’s Supreme Court (SC) has on Saturday announced verdict in favor of Ram Mandir and directed to allot a separate land of five-acre to Muslims for mosque while pronouncing its judgment in the Ayodhya Ram Janmabhoomi-Babri Masjid title suit.

The verdict was announced by an SC constitution bench headed by Chief Justice Ranjan Gogoi. As per the ruling, a temple will be constructed on the disputed site in Ayodhya while Muslims will be given an alternate land within the city. The verdict was unanimous.

The decision has sent shudders through many in the 200-million-strong Muslim minority who fear that the Bharatiya Janata Party (BJP) is bent on turning India into a purely Hindu nation.

The ruling over the holy site had been contested for centuries by Hindus and Muslims, which in 1992 sparked some of the deadliest sectarian violence since independence.

Police were put on alert nationwide ahead of the ruling, with thousands of extra security personnel deployed and schools closed in and around the northern city of Ayodhya, centre of the spat.

Hardliners among India’s majority Hindus, including supporters of Prime Minister Narendra Modi’s BJP, believe that Ram, the warrior god, was born in Ayodhya.

They say that in the 16th century, a Muslim emperor from the Mughal dynasty that ruled northern Indian for centuries built a mosque at the 2.3-acre (1.1-hectare) site.

In the 1980s, as Hindu nationalism and the BJP began to strengthen, pressure grew for the mosque to be knocked down and replaced by a vast Hindu temple.

This unleashed some of the worst religious riots since India’s bloody partition in 1947, leaving around 2,000 people dead, mainly Muslims.

Ten years later, 59 Hindu activists died in a blaze on a train from Ayodhya, sparking riots in Gujarat state -- when Modi was premier -- that saw upwards of 1,000 people perish.

In 2010, a High Court ruled that Muslims and Hindus should split the site -- albeit unevenly, with Hindus granted the lion’s share.

Both Hindu and Muslim groups appealed and the Supreme Court in 2011 stayed the lower court’s ruling, leaving the issue unresolved. The BJP had campaigned for years for a temple to be built at Ayodhya.