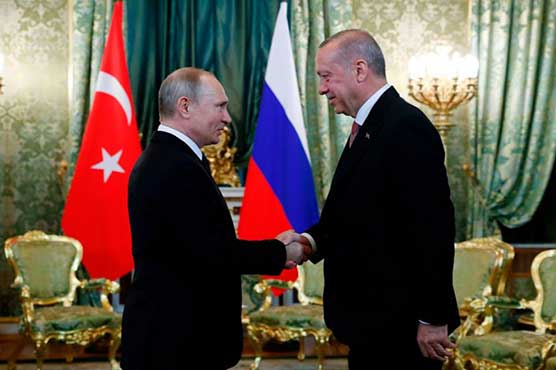 SOCHI (AFP) - Russia and Turkey agreed on Tuesday to ensure Kurdish forces withdraw from areas close to Syria s border with Turkey and to launch joint patrols, in a deal hailed as "historic" by President Recep Tayyip Erdogan.

After marathon talks in Russia s southern city of Sochi, Erdogan and Russia s President Vladimir Putin announced the deal just hours ahead of a deadline for Turkey to restart its assault on Syria s Kurds.

The agreement will see Turkey preserve control of an area 32 kilometres (20 miles) deep into Syria seized during the operation.

From noon (0900 GMT) on Wednesday, Russian military police and Syrian border guards will "facilitate the removal" of Kurdish fighters and their weapons from within 30 kilometres (18 miles) of the entire border.

This withdrawal must be finalised within 150 hours, according to a text of the agreement released after the talks.

Russian and Turkish forces will then begin joint patrols along the Turkish-controlled zone.

Putin said the decisions were "very important, if not crucial, to allowing us to resolve the acute situation on the Syrian-Turkish border."

Erdogan had earlier threatened to resume Ankara s military offensive against Kurdish forces in Syria if they did not withdraw as agreed under a US-brokered deal.

The deadline for their withdrawal had been set to expire by 1900 GMT on Tuesday. A Kurdish official told AFP they had "fully complied" ahead of the deadline.

The deal cements Russia and Turkey s roles as the main foreign players in Syria s conflict, with Moscow s position strengthened after US President Donald Trump announced this month he would be withdrawing American forces from the north of the country.

The announcement cleared the way for Turkey to launch its cross-border offensive on October 9 against the Kurdish YPG militia, viewed by Ankara as "terrorists" linked to the outlawed Kurdistan Workers  Party (PKK).

The assault sparked Western outrage and accusations of betrayal from the Kurds, whose frontline fighters were crucial in the fight against the Islamic State group in Syria.

Russia is a crucial ally of Syria s President Bashar al-Assad and has demanded that Turkey respect the country s territorial integrity.

As the US troops began to withdraw last week, Russian forces moved in to support the Syrian army, whose help against Turkey was requested by the Kurds.

Erdogan said last week he was not bothered by the Damascus regime s return as what mattered to Ankara was pushing back the Kurdish fighters from the safe zone.

Despite being on the opposite sides of the Syria conflict, Turkey and Russia have been working together to find a solution to the war.

Ankara says the YPG is a "terrorist" offshoot of the PKK, which has been waging an insurgency inside Turkey since 1984. The PKK is blacklisted as a terrorist group by Ankara, the United States and the European Union.