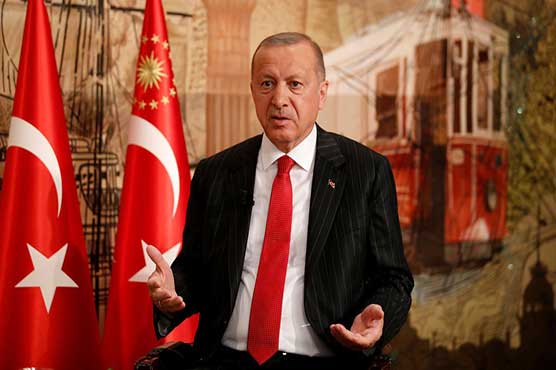 ISTANBUL (AFP) - Turkish President Recep Tayyip Erdogan Friday warned that Ankara would restart its operation against Kurdish forces in Syria on Tuesday evening if they do not withdraw from a "safe zone".

After US Vice President Mike Pence came to Ankara for talks with Erdogan on Thursday, the NATO allies agreed Turkey would suspend its offensive for five days in northern Syria while Kurdish fighters withdraw from the area.

"If the promises are kept until Tuesday evening, the safe zone issue will be resolved. If it fails, the operation... will start the minute 120 hours are over," Erdogan told reporters during a briefing in Istanbul.

He said Turkish armed forces would remain in the region "because the security there requires this", adding that there had been no issues so far.

But the Syrian Observatory for Human Rights said Friday there were Turkish air strikes on the village of Bab al-Kheir, east of Ras al-Ain on the border. The war monitor said five civilians were killed.

While US President Donald Trump appeared to initially green light the offensive, he made repeated threats against Turkey, often in tweets, following international outrage.

He then sent Pence and the US Secretary of State Mike Pompeo with other US officials to Ankara to thrash out a deal, which was announced on Thursday after hours of talks.

Erdogan said the "safe zone" would be 32 kilometres (20 miles) deep, and 444 kilometres in length, "not between Kobane and Tal Abyad".

He added that the region between the border towns of Tal Abyad and Ras al-Ain had been cleared, "but this is not over. The process is ongoing."

Just hours before the US-Turkey talks, a bizarre letter appeared in the US media from Trump to Erdogan, in which the US leader urged Erdogan not to be a "fool" and warned his Turkish counterpart that history risked branding him a "devil."

Turkish media reported that Erdogan had "binned" the letter.

Erdogan said Friday the letter was not in line with "political and diplomatic courtesy... but our mutual love and respect does not allow us to keep it on the agenda."