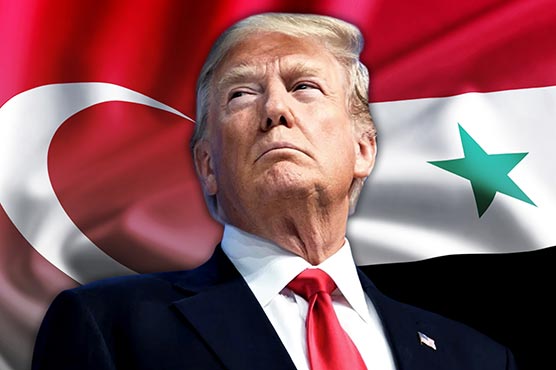 Trump's decision was roundly criticized by some of the president's staunchest Republican allies.

WASHINGTON (AP) — A day after President Donald Trump threatened to "ruin the economy of Turkey" if it goes too far with a planned invasion of northern Syria, he announced on Tuesday that he s invited Turkish President Recep Tayyip Erdogan to the White House next month.

Northern Syria is home to Kurdish-led forces that have been America s ally in fighting the Islamic State for nearly four years. Erdogan, however, sees the Kurds as terrorists and a threat along Turkey s southern border. With Erdogan seemingly intent on launching an incursion into that swath of northern Syria, Trump on Monday moved between 50 and 100 U.S. forces out of the area to other locations in the country.

Trump s decision was roundly criticized by some of the president s staunchest Republican allies in Congress and Democrats. They said pulling the U.S. forces back essentially gives Turkey room to go after the Kurds. Armed by the U.S. and backed by American troops and firepower, the Kurdish-led forces put an end to IS  territorial hold in the region - at the cost of thousands of Kurds killed in years of fighting.

Trump has boasted about U.S. success in defeating IS, but his critics now accuse Trump of abandoning a U.S. ally, setting the Kurds up to be killed. They also worry that if the Kurds end up fighting against Turkish forces, they won t be able to guard detention centers in Syria that house captured IS fighters.

Trump supporters say the president s threat of sanctions could make Erdogan second-guess his planned incursion or perhaps limit it so as not to be slapped with financial penalties that would hurt the Turkish economy. Trump on Monday defended the decision, saying he was fulfilling a campaign promise to withdraw from "endless war" in the Middle East, and he warned Turkey that he would ruin its economy if any American personnel are harmed.

"If Turkey does anything that I, in my great and unmatched wisdom, consider to be off limits, I will totally destroy and obliterate the Economy of Turkey," Trump threatened on Monday.

On Tuesday, Trump sent tweets saying Erdogan will visit Washington on Nov. 13 and defending Ankara as a big trading partner of the U.S., saying it supplies steel for F-35 fighter jets. In fact, the Trump administration removed Turkey from the F-35 program last summer because the Turks refused to cancel the purchase of a Russian air defense system that is incompatible with NATO forces. As part of that process, the U.S. will stop using any Turkish supplies and parts by March 2020.

"We may be in the process of leaving Syria, but in no way have we Abandoned the Kurds, who are special people and wonderful fighters," Trump tweeted. "Likewise our relationship with Turkey, a NATO and Trading partner, has been very good.

"Turkey already has a large Kurdish population and fully understands that while we only had 50 soldiers remaining in that section of Syria, and they have been removed, any unforced or unnecessary fighting by Turkey will be devastating to their economy and to their very fragile currency. We are helping the Kurds financially/weapons!"

Turkey s vice president says his country won t bow to threats in an apparent response to Trump s warning to Ankara about the scope of its planned military incursion into Syria.

Fuat Oktay said in a speech on Tuesday that Turkey is intent on combatting Syrian Kurdish fighters across its border in Syria and on creating a zone that would allow Turkey to resettle Syrian refugees there.

"Where Turkey s security is concerned, we determine our own path but we set our own limits," Oktay said.

A senior administration official said Monday that the U.S. has not yet seen any evidence that an incursion is imminent and so far, Erdogan s planned visit to the United States is a go.

On Monday, two senior State Department officials made a point of noting that while the Turks had highlighted the invitation in their readout of the call, the previous night s White House statement had not included any reference to an Erdogan visit to Washington.

They said the Turkish readout was not incorrect but suggested that the omission of the trip from the White House statement was an indication of Trump s unhappiness with Erdogan s plans for an operation against the Kurds.