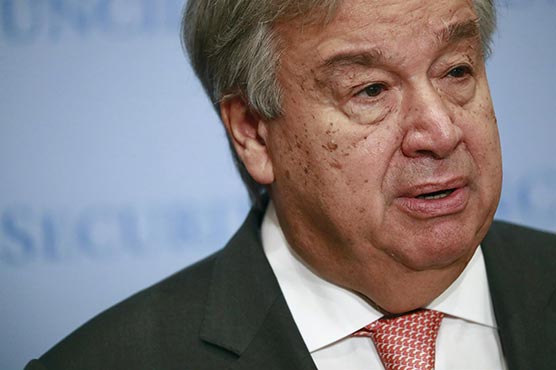 Guterres said his envoy to Syria would bring the committee together in the coming weeks.

(AFP) – United Nations Secretary-General Antonio Guterres announced Monday the creation of a committee on Syria that will include government and opposition representatives to draft a post-war constitution.

"I firmly believe that the launching of a Syrian-organized and Syrian-led Constitutional Committee can be the beginning of a political path towards a solution" to the years-long war, Guterres told reporters.

Guterres said his envoy to the war-torn country, Geir Pedersen, would bring the committee together in the coming weeks.

The committee is to include 150 members -- a third picked by the regime, another by the opposition, and the remaining third by the United Nations.

Monday s announcement came after Guterres said last week that an agreement had been reached concerning the "the composition of the committee".

The UN-backed push to form a constitutional committee had been bogged down by disagreements with President Bashar al-Assad s government over the makeup of body.

It is also unclear what the committee might achieve. Damascus hoped to amend the current constitution, while the opposition wants to write a new one from scratch.

Arguments over who would take on which roles on the committee also delayed the process.

Numerous rounds of UN-led peace talks have failed to end a war that has killed more than 370,000 people and displaced millions since erupting in 2011 with the repression of anti-government protests.

With key military backing from Russia, Assad s forces have retaken large parts of Syria from rebels and jihadists since 2015, and now control around 60 percent of the country.