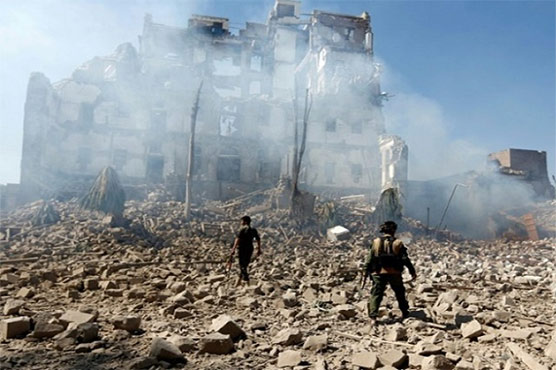 SANAA (AFP) – Impoverished Yemen has been mired in a devastating conflict since Iran-backed fighters overran the capital Sanaa five years ago prompting Saudi Arabia and its allies to launch a military intervention the following year.

Here is a broad overview:

On July 8, 2014, Huthi rebels from the country’s Zaidi Shiite minority launch an offensive from their northern stronghold of Saada.

The rebels ally themselves with military units loyal to ex-president Ali Abdullah Saleh, who was forced to quit after a 2011 uprising.

In October, they capture the Red Sea port of Hodeida, a crucial entry point for imports and humanitarian aid.

In January 2015, they seize the presidential palace in Sanaa, after heavy fighting, and surround the residence of President Abedrabbo Mansour Hadi, who flees to the southern port of Aden.

A coalition led by Sunni-ruled Saudi Arabia, a bitter rival of Shiite Iran, enters the conflict in March 2015 with air strikes on the rebels.

Around a dozen countries form part of the coalition, including five from the Gulf. Washington says it contributes logistics and intelligence.

By August, pro-government forces have retaken five southern provinces. In October, they announce they have retaken control of the Bab al-Mandab strait, a key waterway for international shipping.

Splits emerge in the rebel camp in 2017 and Saleh is assassinated in December by his former Huthi allies.

In June 2018, government fighters, backed by Saudi and Emirati ground forces, launch an offensive to retake the port of Hodeida.

UN-brokered talks between the warring parties open in Sweden in December, yielding a series of breakthroughs including a ceasefire in Hodeida where combat largely ceases.

In May 2019, the UN announces the rebels have withdrawn from Hodeida and two other nearby ports, the first practical step on the ground since the truce deal.

The anti-Huthi camp is also divided, notably in the south where fighting between separatists and unionist forces loyal to the government threatens to create "a civil war within a civil war".

South Yemen was an independent state until it united with the north in 1990, and separatists remain powerful.

In January 2018, heavy fighting breaks out in Aden between unionist forces and separatists.

The separatist-dominated Security Belt forces, which are backed by the UAE, and pro-government fighters seize Aden and other parts of the south, and retain control despite briefly being driven out in a see-sawing battle.

The new front exposes a rift between the UAE and Saudi Arabia, who are effectively backing different sides in the south despite being partners in the anti-Huthi coalition.

Yemen’s conflict has killed tens of thousands of people, mostly civilians, relief agencies say, and has triggered what the UN describes as the world’s worst humanitarian crisis.

The UN children’s agency UNICEF describes the conflict as "a living hell" for children, with 1.8 million under-fives suffering severe malnutrition.

In September 2019, the United States says it is in talks with the Huthis, seeking to end the war.

The negotiations open a direct channel between President Donald Trump’s administration and the Huthis amid the threat of a broader regional conflict with Iran.

On September 20, the Huthis unexpectedly announce that they plan to halt all attacks on Saudi Arabia as part of an initiative to end the devastating conflict.

It follows twin attacks on Saudi oil installations, claimed by the Huthis, that knocked out half of the kingdom’s production.

Riyadh’s ally Washington condemns the attacks as an "act of war", placing the blame on Iran and announcing it is imposing new sanctions and sending more troops to the Gulf.

Mehdi al-Mashat, head of the Huthis’ supreme political council, announces "the halt of all attacks against the territory of Saudi Arabia".

"Pursuing war is not in anyone’s interest," he says.