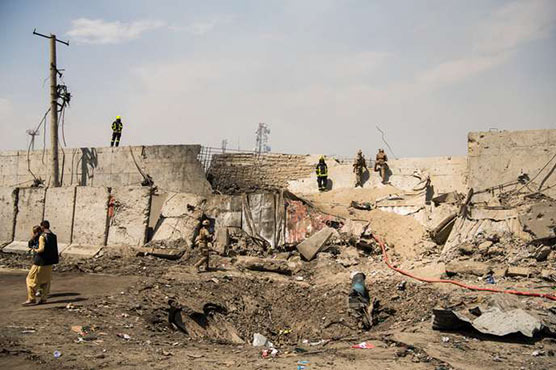 On Friday U.S. envoy Khalilzad was back in Doha, to continue talks with the Taliban.

KABUL/HERAT, Afghanistan (Reuters) - Taliban fighters launched fresh assaults in the western Afghan province of Farah on Friday, government officials said, part of a wave of violence that has cast a shadow over a peace deal struck between U.S. and Taliban negotiators this week.

The insurgents, who now control more territory than at any time since 2001, attacked Farah city early in the morning before they were beaten back by security forces supported by air strikes, police said.

By the evening, Taliban spokesman Qari Yousuf Amadi said its fighters had seized Anar Dara - a district in the sparsely populated province bordering Iran where the insurgents have wide control.

Afghan leaders including President Ashraf Ghani have been increasingly critical of the deal reached between U.S. special envoy Zalmay Khalilzad and Taliban representatives in Doha this week as the violence has escalated across the country.

Under the draft accord, thousands of U.S. troops would be withdrawn over the coming months in exchange for guarantees that Afghanistan would not be used as a base for militant attacks on the United States and its allies.

However, according to the agreement, a full peace agreement to end more than 18 years of war would depend on subsequent “intra Afghan” talks. The Taliban have rejected calls for a ceasefire and instead stepped up operations across the country.

As well as attacks on the northern cities of Kunduz and Pul-e Khumri, the Taliban have carried out two major suicide bombings in the capital Kabul over the past week, as Khalilzad held consultations over the draft agreement.

On Thursday, Abdul Samad Amiri, the acting head of the Independent Human Rights Commission for the western province of Ghor, was kidnapped while travelling there in a car from Kabul, then killed, said security forces who blamed the Taliban.

On Friday U.S. envoy Khalilzad was back in the Qatari capital Doha, along with Gen. Scott Miller, the top U.S. commander in Afghanistan, to continue talks with the Taliban, who said the meeting had gone well.

Afghanistan’s Tolo TV reported that the Afghan president had been due to visit Washington for talks with U.S. President Donald Trump on Monday only for his trip to be cancelled at the last minute. There was no immediate comment from Ghani’s office or from the White House.

The fighting and the Taliban’s apparent refusal to compromise on issues including a ceasefire, has caused a public backlash that has encouraged Ghani to criticise the deal, said Ali Jalali, who served as Afghanistan’s first post-Taliban interior minister and from 2017-2018 as ambassador to Germany.

“The strong reaction of the people against these Taliban attacks has given more reason for Ghani to push back,” he said. “Ghani is riding a wave of public resentment of the U.S. military and the deal with the Taliban.”

There has been particular resentment of references to the Islamic Emirate of Afghanistan, the title the Taliban use for themselves and which many of their commanders want to see adopted as the official constitutional status of the country after a peace agreement.

On the government side, many see its inclusion in the draft accord as an acknowledgement of the movement’s legitimacy and an implicit undermining of the internationally recognised Islamic Republic of Afghanistan created under the constitution adopted after the fall of the Taliban in 2001.

The United States ended its combat role in 2014, although 20,000 U.S. and NATO forces remain. They still train and support Afghan troops fighting the Taliban who fear being left vulnerable if the United States leaves.