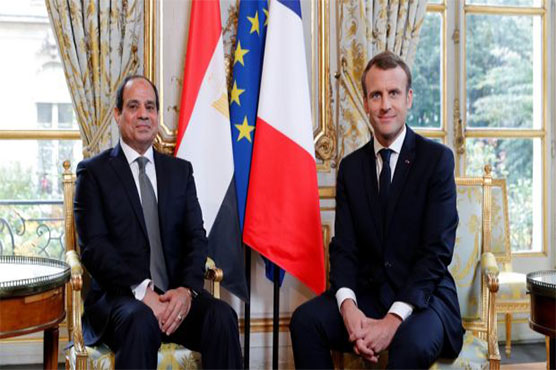 French President on Tuesday held a surprise second meeting with his Egyptian counterpart.

Before travelling on to Cyprus for a summit of southern EU countries, Macron and Sisi held an unscheduled 45-minute meeting at Cairo airport.

"I decided that a new conference will be held in Paris to see how to act more effectively," he said, without giving details.

A diplomatic source said the French capital would host a forum on religious minorities in the Middle East, but without giving a date.

Macron visited the church adjacent to the cathedral that was the site of a December 2016 jihadist attack which killed 29 people.

He also met in Cairo with Ahmed al-Tayeb, the grand imam of Al-Azhar, the most prestigious seat of Sunni Islamic learning in Egypt.

Their talks centred on "the training of imams (prayer leaders) in France and the fight against the misguided vision of religion", the French presidency said.

Egyptian authorities arrested six activists critical of Sisi s government this week, including members of Karama, according to lawyer Negad al-Borai and Mohamed al-Bassiouni, a member of the opposition party.

There was no immediate confirmation of the report from the interior ministry, which for its part announced the arrest of 54 suspected members of the outlawed Muslim Brotherhood.

The human rights situation in Egypt was at the centre of talks between Macron and Sisi on Monday.

Their different visions were on show at a joint news conference where Macron said respect of freedoms was inseparable from stability while Sisi said security was the priority for Egypt s 100-million population.

During the visit, Macron and Sisi oversaw the signing of some 30 deals worth nearly a billion euros (dollars) including in transportation, education and health. No arm deals were signed.

But Amnesty International on Tuesday stood by a 2018 report that French security equipment including armoured vehicles were used by the Egyptian government in "violent repression" of protests, charges that Sisi denied at the press conference.

"French vehicles were not merely assisting the security forces, but were themselves tools of repression, playing a very active role in the crushing of dissent," Amnesty s report said in October.

The Egyptian president said: "It s not possible to use weapons against an unarmed citizen unless they take up and use a weapon."

A year after Sisi took office in 2014, Egypt signed deals worth six billion euros ($6.8 billion) to buy 24 Rafale fighters from France as well as other military hardware such as Mistral warships and missiles.