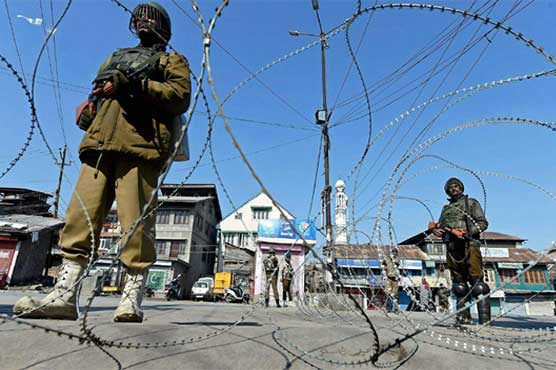 SRINAGAR (Web Desk) - In occupied Kashmir, Indian authorities have imposed curfew like restrictions across Srinagar and adjoining areas to prevent a march towards the Indian army headquarters in Badami Bagh, Srinagar today (Monday).

Call for the march has been given by the Joint Resistance Leadership comprising Syed Ali Gilani, Mirwaiz Umar Farooq and Muhammad Yasin Malik against the killings by Indian troops in Pulwama district on Saturday.

Restrictions have been especially imposed within the jurisdictions of Khanyar, Rainawari, Nowhatta, Safakadal, Maharaj Gunj, Ram Munshibagh, Maisuma and Kralkhud police stations of the Srinagar.

Meanwhile, complete shutdown is being observed for the third consecutive day, today, in Srinagar, Gandarbal, Badgam, Kupwara, Baramulla, Bandipora, Islamabad, Pulwama, Kulgam, Shopian Banihal, Khari, Bhadarwah, Doda, Thathri, Gandoh, Ramban, Kishtwar and Poonch and others areas of the territory. All shops and business establishments are closed while traffic is off the road.

On Sunday, Pakistan strongly condemned the horrific bloodbath in Indian occupied Jammu and Kashmir by the Indian occupation force that has resulted in the martyrdom of 14 innocent Kashmiris and injuries to more than 200 protesters.

The mindless killing spree carried out by the Indian occupation forces on Saturday is yet another example of the Indian atrocities against the innocent Kashmiris. India continues to kill and maim, under the garb of "combating terror". In Indian occupied Jammu and Kashmir, every man, woman or a child who protests against India’s illegal occupation and brutalities against innocent and hapless Kashmiris, is a "terrorist", the Foreign Office stated in a press release.

"India continues to use vicious tactics to intimidate, disrespect and silence the Kashmiris and their struggle to achieve their just right to self determination."

The Foreign Office said India has continued to ignore legitimate demands for international probe into gross and systematic human rights violations, including use of pellet guns, excessive use of force, arbitrary arrest and detentions, as well as continued sexual violence, as a part of overall impunity enjoyed by the Indian security forces.

Despite hollow Indian claims, Jammu and Kashmir remains an internationally recognized dispute, pending on the agenda of the UN Security Council. The dissociation of India from reality is alarming, more so for India itself. To try to deflect international attention from IoK, India continues to launch a volley of attacks along the Line of Control, killing and maiming innocent civilians, living along the border. 1.5 billion people of this region have been deprived of peace and prosperity for the last 70 years by India, as it backed off from implementing the promises it made with the people of Jammu and Kashmir and with the international community.

"The Government and the people of Pakistan reaffirm their continued and resolute moral, diplomatic and political support to the oppressed people of Indian occupied Jammu and Kashmir in their valiant struggle for realization of the fundamental right to self determination," the FO said.

Pakistan also urged the international community to call upon India to put an immediate halt to the bloodshed in IoK and to be cognizant of its responsibilities in the matter. India has to allow investigations by an independent fact finding Commission of OCHCR, OIC and IPHRC into the ongoing gross human rights violations in IoK and to fulfill its obligations under UN Security Council resolutions on Jammu and Kashmir.