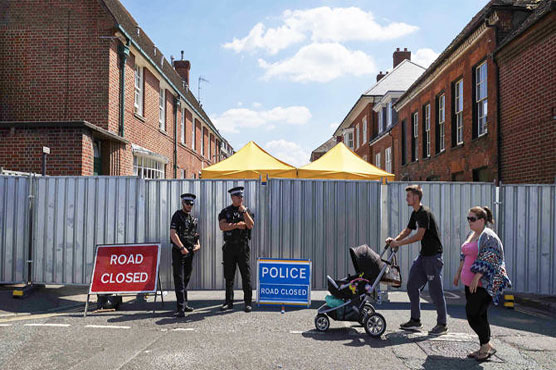 Britain's defence minister said that the death a British woman from Novichok was down to Russia.

SALISBURY (AFP) - Britain s defence minister said Monday that the death of a homeless British woman from exposure to the nerve agent Novichok was down to Russia.

Dawn Sturgess, a 44-year-old mother of three, died on Sunday from contact with the same military-grade toxin that nearly killed a former Russian spy and his daughter in an attack that Britain blamed on Moscow.

Sturgess and Charlie Rowley, 45, fell ill last weekend in the town of Amesbury, near Salisbury, the city where former double agent Sergei Skripal and his daughter Yulia were attacked with Novichok in March. They have since recovered.

"The simple reality is that Russia has committed an attack on British soil which has seen the death of a British citizen," Defence Secretary Gavin Williamson said in parliament on Monday.

"That is something that I think the world will unite with us in actually condemning."

The Kremlin said Monday it would be "absurd" to suggest Russia was involved in the death of Sturgess.

Russia is "deeply concerned by the continuing appearance of these poisonous substances on British territory," which "present a danger not just for the British but for all Europeans," President Vladimir Putin s spokesman Dmitry Peskov said.

In March, Britain and its allies accused Russia of trying to kill the Skripals, prompting angry denials and sparking an international diplomatic crisis.

British Prime Minister Theresa May said she was "appalled and shocked" by the death of Sturgess, who had been living in a homeless hostel in Salisbury in southwest England.

"Dawn s death only strengthens our resolve to find out exactly what happened and who was behind it," Home Secretary Sajid Javid, the interior minister, told parliament after chairing an emergency cabinet meeting on the incident.

He said the murder investigation was being led by around 100 counter-terror detectives.

Tests have confirmed that it was the same type of Novichok used to poison the Skripals, he said, and that Rowley and Sturgess "touched a contaminated item with their hands".

Javid said military scientists had not yet been able to determine if the poison was from the same batch used on the Skripals.

Police said they could not yet say whether the nerve agent in the Amesbury case was linked to the Salisbury attack -- but it was their main line of inquiry.

The head of Britain s counter-terror police also said he could not rule out further contaminations.

"I simply cannot offer any guarantees," said Assistant Commissioner Neil Basu, who is leading the investigation.

Whilst 21 other people have come forward with health concerns, they have been screened and "all been given the all-clear", he said.

Police said that given the deadly dose, the British couple were believed to have become exposed to Novichok by handling a "contaminated item" -- with speculation that it could have been the container used to administer the nerve agent to the Skripals.

"This latest, horrendous turn of events has only served to strengthen the resolve of our investigation team as we work to identify those responsible for this outrageous, reckless and barbaric act," said Basu.

Residents of the homeless hostel in Salisbury where Sturgess lived, which was evacuated after the couple fell ill, expressed their devastation at the news of her death.

"It could easily have happened to anyone, to me or my partner," 27-year-old Ben Jordan told AFP. "We are really, really sad. I am praying for Charlie."

So far, there is no evidence that the couple visited any of the sites involved in the Skripal case.

Sturgess collapsed on the morning of June 30 and was taken to hospital. That afternoon, Rowley fell ill at the same address in Amesbury and was also hospitalised.

The Skripals have been released from hospital but the investigation into the attack on them continues. No arrests have been made.