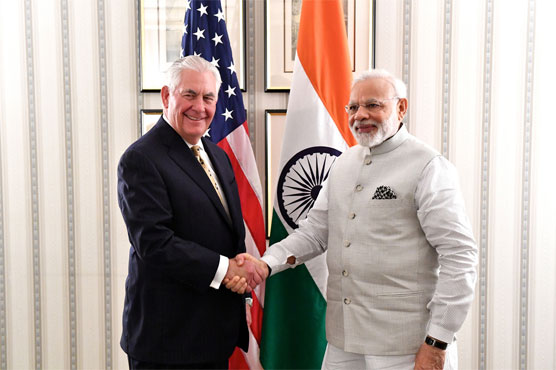 Tillerson landed in New Delhi on Tuesday night after a day-trip to India’s arch rival, Pakistan.

Tillerson landed in New Delhi on Tuesday night after a day-trip to India’s arch rival, Pakistan, which he called an important U.S. ally in the restive region that includes war-torn Afghanistan.

The visit comes a week after Tillerson made a speech in Washington about the United States wanting to "dramatically deepen" cooperation with India which it sees as a key partner in the face of what he considers to be negative Chinese influence in Asia.

"This visit could not come at a more promising time for the U.S.-India partnership, as we celebrate the 70th anniversary of relations between our two countries and look forward to co-hosting the Global Entrepreneurship Summit in (the Indian city of) Hyderabad next month," Alice G. Wells, a senior U.S. state department official, wrote in a blogpost.

He will also see his Indian counterpart, Sushma Swaraj, before meeting Modi.

Fast-growing India is already a major market for the United States, with bilateral trade at around $115 billion last year which the countries aim to raise to $500 billion by 2022.

Defense ties are also growing quickly, though U.S. firms such as Lockheed Martin and Boeing offering to set up production lines in India to win deals worth billions of dollars are seeking stronger assurances they won’t have to part with proprietary technology.

Trump told Modi during their meeting in June that there was a need for more balance in the U.S.-India trade relationship in keeping with his campaign promise to expand American exports and create more jobs at home. Last year the U.S. trade deficit with India neared $31 billion.

The Indo-American Chamber of Commerce (IACC) said the recent U.S. outreach to India should be backed by an economic thrust to sustain the upswing in the relationship amid rising Chinese investments in the region, mainly through its massive “Belt and Road” infrastructure project.

“The Chinese investments in the region are peaking and its every strategic move is crafted to realize its agenda to become an economic superpower ...,” IACC said in a statement. “India offers a pathway for the U.S. to make its economic presence in the region and to meet the developmental imperatives of the nations in the region.”