Turkey urges US to reverse visa halt, summons another staffer 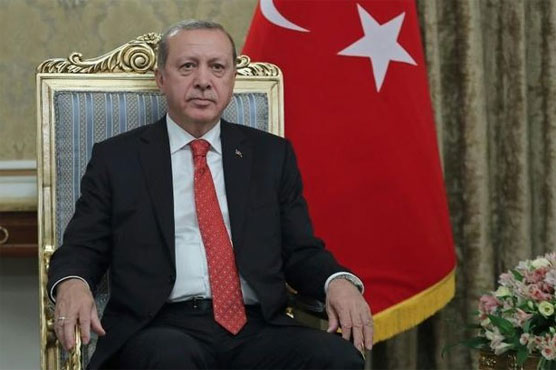 Turkey urged US to reverse decision to halt the issuing of all regular visas at American consulates.

ANKARA (AFP) - Turkey on Monday urged the United States to reverse a decision to halt the issuing of all regular visas at American consulates in the country, as prosecutors summoned another Istanbul mission staffer in an escalating crisis.

The dispute, which analysts have described as the worst between the NATO allies in half a century, erupted when Turkey jailed a Turkish employee working at the American consulate in Istanbul.

Ankara hit back at the US suspension of the issuing of non-immigrant visas -- a move described by President Recep Tayyip Erdogan as "very, very saddening" -- with a tit-for-tat response against American citizens.

The Turkish foreign ministry summoned the US embassy s deputy chief of mission on Monday, urging Washington to reverse its visa decision.

The US embassy in Ankara said Sunday that it would suspend issuing visas for tourism, medical treatment, business, temporary work or study, after the arrest last week.

"Above all, this decision is very, very saddening," Erdogan said in his first reaction to the decision, at a news conference with his Ukrainian counterpart Petro Poroshenko in Kiev.

"For the (US) ambassador in Ankara to take a decision like this, to put it into practice, is saddening," he added.

The ambassador, John Bass, insisted the suspension was "not a decision we took lightly" in a video released late Monday.

"We hope it will not last long, but at this time, we can t predict how long it will take to resolve this matter," he said.

Last week an Istanbul court remanded in custody the consulate employee over accusations of links to the group of US-based Muslim preacher Fethullah Gulen, whom Ankara blames for the failed 2016 coup aimed at unseating Erdogan.

He has been formally charged with espionage and seeking to overthrow the Turkish government, accusations the US embassy rejected as "wholly without merit".

Bass criticised the employee s lack of "sufficient access" to his lawyer.

Turkish television, including the private NTV channel, said earlier that an arrest warrant had been issued for the employee, though this was not confirmed by Anadolu.

But the employee s wife and child, whose age was not given, were detained in the Anatolian city of Amasya on suspicion of being key members of Gulen s group, it said.

The Hurriyet daily reported that the individual wanted by prosecutors had taken sanctuary at the US consulate in Istanbul.

"We don t know if these arrests are singular events or if we should expect other Turkish staff members to be arrested for simply talking to Turkish government officials or the wider Turkish public in the course of their duties," Bass said.

Erdogan s spokesman Ibrahim Kalin previously pointed to a phone call made from the Istanbul consulate to a key suspect on the night of the coup.

"It s definitely a historic low in ties, at least in recent memory," said Soner Cagaptay, director of the Turkish Research Program at the Washington Institute, adding that the last such dispute of this magnitude was after the 1974 Turkish invasion of Cyprus.

"Neither side is willing to step back," he said.

The developments also came after a Turkish employee at the US consulate in the southern city of Adana was arrested in March on charges of supporting the Kurdistan Workers  Party (PKK).

Turkish officials had expressed hope of a new page in Ankara-Washington relations under President Donald Trump, and had pressed Washington for the extradition of the Pennsylvania-based Gulen, who denies any link to the coup bid.

The lack of movement on the issue has further strained ties already fraying over Washington s support for a Syrian Kurdish militia Ankara deems a terror group.

Meanwhile, members of Erdogan s security detail were indicted by US authorities after clashes with protesters during an official visit this year, infuriating Erdogan.

American pastor Andrew Brunson, who ran a church in the western city of Izmir, has been held by authorities since October 2016 on charges of being a member of Gulen s group.

Erdogan suggested last month Turkey could release him in exchange for Gulen but Washington showed little interest in the proposal.

"It will be hard for relations to be restored any time soon to what they used to be," Cagaptay said.

Turkey s influential Industrialists  and Businessman s Association (TUSIAD) described the move by the US as "most unfortunate", saying it risked hurting citizens who had nothing to do with the row.

Flag carrier Turkish Airlines offered refunds or exchanges to passengers with Turkish passports flying to the US and vice versa. Its shares were hit heavily by the row, falling 9.26 percent to 8.43 dollars a share.

The tensions put pressure on the Turkish lira, which lost 3.0 percent against the US dollar to trade at 3.72 lira while, the Borsa Istanbul 100 index was down 2.7 percent at 101,298 points.

Seeking to reassure markets, the Turkish deputy central bank governor Murat Uysal said: "There could be a temporary impact because of geopolitical concerns, we are watching closely."