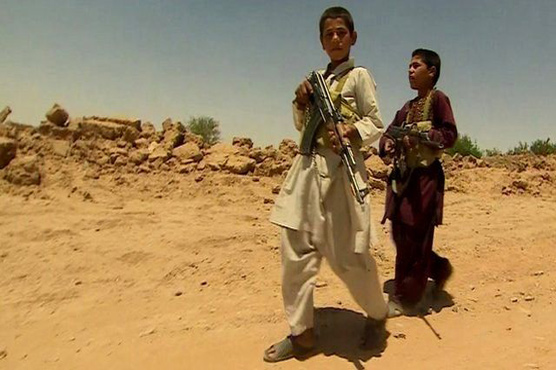 The use of child soldiers by all sides in the Afghan conflict is well documented, including in pro-government security forces, where the practice of "bacha bazi", or child sex slavery, is said to be institutionalised. Photo: BBC

(AFP) - The rescue, this summer, of dozens of Afghan youths destined to be trained as Taliban fighters has spotlighted how entrenched poverty is fuelling a renewable supply of child soldiers to endlessly replenish the insurgents’ ranks.

Afghan forces freed almost 40 children during multiple raids near the Pakistani border. Officials said traffickers working with the Taliban had recruited the boys, some as young as four, from poor families by promising to provide them with a religious education. In reality they were set to be indoctrinated by hardline mullahs in Pakistan and receive military training to carry out attacks inside war-torn Afghanistan, authorities said. 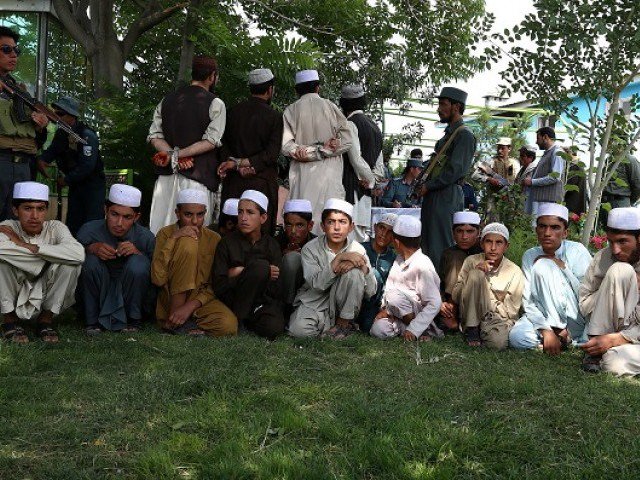 Afghan children released from captivity are presented to the media at the police headquarters in Ghazni. The rescue this summer of dozens of Afghan youths destined for Pakistan religious schools to be trained as Taliban fighters has bolstered claims that insurgents are increasingly recruiting children to reinforce their ranks Photo: AFP

“Our parents always wanted us to learn Islamic studies but we didn’t know that we would be fooled and brainwashed to become suicide bombers,” nine-year-old Shafiullah told AFP after being rescued by police. The use of child soldiers by all sides in the Afghan conflict is well documented, including in pro-government security forces, where the practice of “bacha bazi“, or child sex slavery, is said to be institutionalised.

But the incidents this summer in southeastern Ghazni province illustrated a practice the Afghan government and rights groups have long accused the Taliban of: kidnapping children to indoctrinate as fighters at madrassas in Pakistan and Afghanistan. In a recent speech charting US strategy in Afghanistan, President Donald Trump vowed, among other things, to “dry up” militant recruitment.

But experts say poverty is a significant driving factor, with parents unable to provide for their children delivering them, often unknowingly, into the hands of abusers and extremists. AFP spoke recently with several of the children rescued at an orphanage in southeastern Ghazni province, where they had been placed as officials tried to track down their parents.

“They talked to my father and he had no objection,” said nine-year-old Nabiullah, sobbing as he recalled being taken from his home by recruiters. Another child, who told AFP he was eight, said: “Two Taliban came saying they wanted to take us to a madrassa in Quetta. I didn’t know more until the men were arrested.”

Officials said they had saved the children, most aged between four and 14, from what Mohammad Aref Wahidi, deputy governor of Ghazni, described as “kidnapping gangs” taking them to Pakistan. The children were “given drugs by their abductors that made them dizzy and confused”, provincial police chief Mohammad Mustafa Mayar told AFP, adding that among those freed were 13 youngsters allegedly trained as suicide bombers.

They were later paraded in front of the media, with many crying as they stood beside the traffickers. Afghan elders have denied they intentionally send youngsters to join the Taliban’s nearly 16-year insurgency. “I admit that children are being sent for religious studies in Pakistani madrassas, but I don’t think they are trained to become suicide bombers,” Haji Mohammad Sharif, a tribal elder from Paktika province which borders Ghazni, told AFP.

The insurgents also deny the claims. But Afghan authorities routinely report intercepting child soldiers, and Human Rights Watch issued an extensive report on the issue last year, stating that indoctrination begins as young as six. “According to relatives of boys recruited by the Taliban, by the time they are 13, Taliban-educated children have learned military skills including use of firearms, and the production and deployment of IEDs,” the report said.

The HRW report noted the poverty-driven trend has also been increasing at madrassas in Afghanistan, particularly in Kunduz province, and said the Taliban refuses to return children once the parents figure out what is going on. 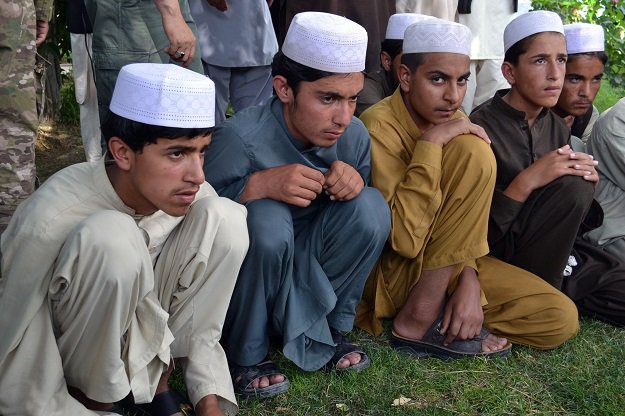 Afghan children released from captivity are presented to the media at the police headquarters in Ghazni. The rescue this summer of dozens of Afghan youths destined for Pakistan religious schools to be trained as Taliban fighters has bolstered claims that insurgents are increasingly recruiting children to reinforce their ranks. Photo: AFP

In June this year, officials in Kunduz said they had detained an 11-year-old boy who intended to attack police after being taught at a local madrassa that government forces were a legitimate target as they were either “infidels or serving the infidels”. In his speech last month, Trump said the US was “not nation-building again. We are killing terrorists”, and placed responsibility for Afghan society squarely on Afghans.

But absolute poverty in the country is increasing, according to a report issued by the World Bank and the Afghan government in May this year, which said that 39 percent of Afghans are unable to meet their basic needs. That suggests the trend noted by HRW could continue. Ahmad Shaheer at Al-Azhar University in Cairo estimates that 10,000-20,000 Afghan children have passed through Pakistani religious schools. Once they are cut off from their families the indoctrination begins.

“Life is very hard for them there. They are not given anything to eat and the madrassa becomes like a jail,” said Shaheer. “Step by step they start hating their family… Hatred is fuelled and they feel they have no future in life.”