Muslims at Hajj are worried about Trump's policies towards them 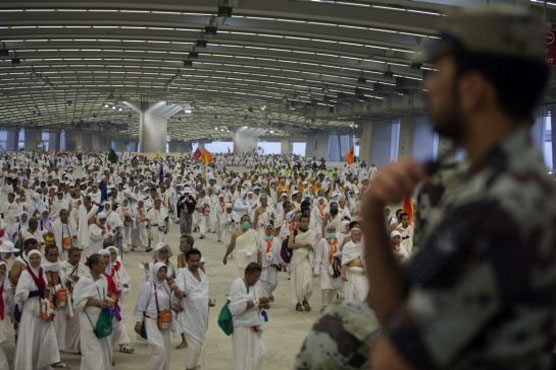 As a candidate, Trump proposed barring Muslims from entering the United States.

MAKKAH/RIYADH (Reuters) - Even at Islam’s holiest sites and during the most sacred time of year for Muslims, some people cannot stop talking about Donald Trump.

Among one group of American, Canadian and British pilgrims in Makkah this week for the annual Hajj, the U.S. president and policies they say target Muslims and immigrants are a regular conversation topic.

“People are irritated, angry, somber, a little bit worried,” said Yasir Qadhi, an Islamic scholar who traveled from Tennessee for his fourteenth pilgrimage.

“No one that I know is happy at the current circumstances or the current administration. No one, not a single person in this entire gathering.”

As a candidate, Trump proposed barring Muslims from entering the United States. In office, he ordered temporary bans on people from several Muslim-majority countries, which have been blocked by courts that ruled they were discriminatory.

His administration has denied any intention of religious discrimination in the travel ban, saying it is intended purely as a national security measure.

But sharp rhetoric about the threat posed by “radical Islam” which was a central part of his campaign has also drawn accusations he risks alienating more than three million Americans who practise Islam peacefully.

Many American Muslims say his stance has fueled an atmosphere in which some may feel they can voice prejudices or attack Muslims without fear of retribution.

The Hajj, a five-day ritual which retraces the journey the Prophet Mohammad (PBUH) took 14 centuries ago, is a religious duty once in a lifetime for every able-bodied Muslim who can afford it.

It is the world’s largest annual Muslim gathering, with over 2.3 million people attending this year. The faithful come from nearly every country in the world, speaking dozens of languages and sometimes practicing Islam in different ways based on local customs or traditions.

American Wajahat Ali said friends back home had asked him to pray for the United States while on Hajj and other pilgrims he met offered sympathies and encouragement that the situation would improve.

Malaysian pilgrim Abdul Azim Zainul Abideen said the president should stop what he called his attacks on Islam.

“We don’t have anything against any Americans or non-Muslims,” he said on Friday at a symbolic stoning of the devil, part of the Hajj rituals.

His sister, 27-year-old Anisa, said she was worried by reports of an uptick in violence against Muslims in the United States “just because of wearing hijab (headscarf) in the streets or just because you have a beard”.

Saudi Arabia, which stakes its reputation on organizing the Hajj, has urged pilgrims to put aside political concerns and focus on spirituality. But Islamophobia is a common subject at meals and while waiting in long lines to pray and conduct rituals.

“Muslims across the world are now more aware of the different political situation,” said Yusuf Badat, an imam from Toronto.

“They’re all working together to try and have a better image for themselves because many times the coverage is given to ISIS and these types of fringe groups.”

Daesh has carried out or inspired deadly attacks around the world after proclaiming a self-styled caliphate in Iraq and Syria to rule over all Muslims. The ultra-violent group has been widely denounced by Muslim religious and political leaders.

Baha al-Deen, a pilgrim from ex-Soviet Georgia, said any labeling of Muslims as terrorists should stop.

“God gave us minds and tongues so we can understand each other and talk about our problems,” he said. “Otherwise we will fight like animals.”