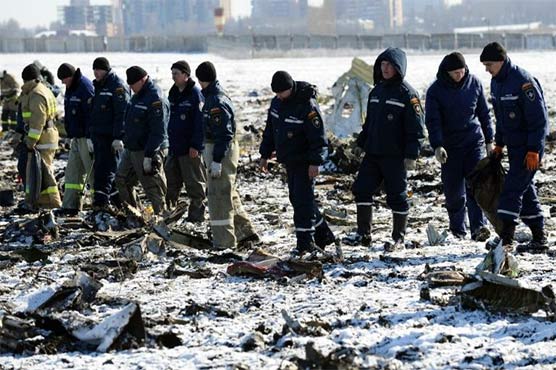 The Boeing 737, which flew from Dubai to the southern Russian city of Rostov-on-Don, exploded.

ROSTOV-ON-DON, Russia (AFP) - Investigators in southern Russia on Sunday were probing the causes of a flydubai passenger jet crash that killed all 62 people on board, as emergency workers at the site wrapped up the salvage operation.

The Boeing 737, which flew from Dubai to the southern Russian city of Rostov-on-Don, exploded into a fireball early Saturday after missing the runway in bad weather as it was reportedly making its second attempt to land after circling for several hours.

Investigators confirmed that all 55 passengers and seven crew -- including nine different nationalities, with 45 coming from Russia -- died instantly and launched a criminal probe into whether pilot error, a technical fault or poor weather was to blame.

Transport Minister Maxim Sokolov said Sunday that emergency service workers had completed their "search and rescue" operation by 0600 GMT at the site where tangled debris was spread across a wide area.

Investigators were to spend the day combing the scene for clues of what caused the crash, Sokolov said, with representatives from state-owned budget airline flydubai -- a sister firm of Emirates Airlines -- arriving to aid the probe.

Sources told Russian news agencies that the two black boxes from the Boeing jet -- holding vital flight data -- had been transported to Moscow for examination.

Authorities also said they were starting the grisly task of identifying the collected human remains using DNA samples from relatives.

Residents in Rostov-on-Don -- a city of some 1 million around 1,000 kilometres (620 miles) south of Moscow -- laid flowers and cuddly toys at the airport entrance as they tried to digest the tragedy.

"I came to give remembrance to those who died. I am from Rostov myself and although I don’t personally know those killed, a lot of names are well known, it’s a small city," local resident Boris told AFP.

The arrivals and departures boards in the terminal were red with cancelled flights as the airport remained closed but officials said that it could start working again normally as early as Monday.

The passengers on board flight FZ981, which took off from Dubai at 1820 GMT Friday and had been due to land at 2240 GMT, included 44 Russian nationals, eight Ukrainians, two Indians and one Uzbek, the airline said. They comprised 33 women, 18 men and four children.

The company said the Cypriot pilot and Spanish co-pilot each had nearly 6,000 hours of flying experience.

The five other crew members were from Spain, Russia, the Seychelles, Colombia and Kyrgyzstan.

Investigators said in an initial statement Saturday that the plane had "skimmed the ground and broke into several pieces" with fragments of the Boeing 737 reportedly scattered up to 1.5 kilometres (one mile) from the crash site.

Unconfirmed security footage on Russian state television appeared to show the jet plummeting nose first into the ground at high speed before exploding.

A strong wind warning was in place and it was raining hard at the time of the crash.

Based at Dubai airport, the low-cost airline has a strong safety record, although one of its planes was hit by a bullet as it landed in Baghdad airport in January 2015, prompting multiple companies to suspend flights to the Iraqi capital. No one was hurt in that incident.

Russian airports have a patchy safety history with the fatal private jet crash in 2014 that killed Total oil giant’s boss Christophe de Margerie on take-off in Moscow one of a string of incidents.

Russia’s aviation agency has said there was no doubt about the safety of the runway or facilities at Rostov-on-Don and brushed off any blame directed at the air traffic controllers.

The last major aviation tragedy involving Russia was in October last year, when a passenger jet on its way from Egypt’s Sharm el-Sheikh resort to Saint Petersburg was brought down by a bomb in the Sinai Peninsula.

All 224 people on board, the vast majority of them Russian, were killed, with the Egyptian branch of the Islamic State group claiming responsibility for the attack.

Russian spacecraft with US grandpa onboard docks at space station

Russian air strikes in Syria this week after all: US military