US deploys ground-attack A-10 planes to Turkey 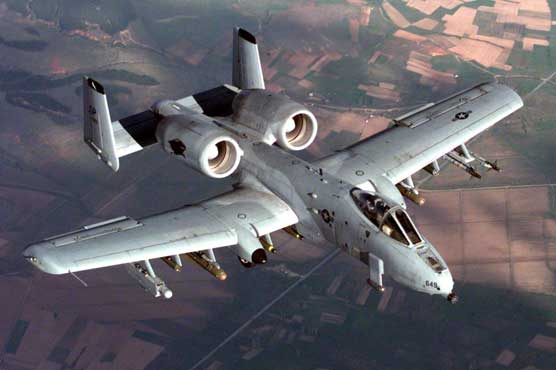 12 planes, famed for their tank-destroying capabilities, arrived over the weekend

WASHINGTON (AFP) - The US military has deployed a dozen A-10 ground-attack planes to the air base at Incirlik in southern Turkey, a US official said Tuesday.

The 12 planes, famed for their tank-destroying capabilities, arrived over the weekend and have already been scheduled to fly missions in support of the US-led coalition fighting Islamic State jihadists in Iraq and Syria, the official told AFP.

Speaking on condition of anonymity, he said the move had "added capability" to the coalition s efforts against IS.

Known by troops on the ground as "Warthogs," A-10 planes are heavily strengthened and designed to withstand direct hits from armor-piercing rounds.

The planes typically fly lower and slower than F-16s, which also puts them more in harm s way.

"There s more significant risk than other aircraft due to the flight path they typically fly," the official said.

It wasn t immediately clear if the US-led coalition has already used A-10s during its bombing campaign of IS jihadists, which has been going on for more than a year.

The move comes three weeks after Russia launched its own bombing campaign in Syria. Officials from the Pentagon and Moscow are due to finalize an "understanding" over air-safety rules to avoid planes from the two powers flying into each other.

The official said the A-10s could potentially be used to support rebel groups fighting IS in northern Syria, including a group called the "Syrian Arab Coalition" that received a massive airdrop of ammunition this month.

Turkey in July allowed US planes to use Incirlik Air Base to attack IS positions in Syria.